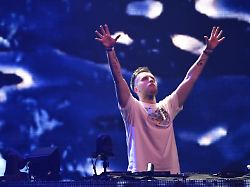 One and a half years have passed since the sudden death of Avicii. In Stockholm, former companions will revive their hits for an evening. Stars of the EDM scene such as Nicky Romero and David Guetta celebrate their deceased friend. It's not just about music.
The star of the evening is not there and it is somehow. A pithy Avicii hit after the next roars through the Friends Arena in Stockholm as friends and companions such as David Guetta and Aloe Blacc celebrate the late Swedish exceptional DJ on Thursday for an evening as if he's standing right next to them on stage. Tens of thousands of fans cheer, scream, sweat. Eyes shine, some of pure joy, others tear-wet. In the end, all this will benefit a good cause that will remain connected with Avicii, who died a year and a half ago, like his music: the fight for mental health. Avicii, whose real name was Tim Bergling, was found dead on 20 April 2018 in Muscat, the capital of Oman. The police excluded a third party debt. Avicii, world star and creator of hits like "Levels", "Hey Brother" and "Wake Me Up", was only 28 years old.But Bergling's music lives on, not least shows the enthusiasm of the fans in the Friends Arena. Loud beats drive them through the evening, in addition to the voices of musicians like Aloe Blacc, Rita Ora and Adam Lambert through the football stadium, whose roof is closed this evening. A band of more than 30 musicians plays Aviciis music live on stage – just as the DJ always intended, according to his father. Songs from posthumously published album Only half a year ago, the studio album "Tim" had delivered a dozen new songs featuring Avicii has worked with stars such as Chris Martin and Imagine Dragons until recently, but also lesser-known singers like Joe Janiak. The result are twelve songs, which can be heard as a late testimony of a sad and stress-plagued musician – or simply as a pallet of excellent electronic beats that spread good mood despite their thoughtful lyrics. They are proof that fast vibes and profundity do not have to be mutually exclusive. Not least the decoupled single "SOS" describes quite well the ambiguity that Avicii played until recently: clear, happy music paired with a text that sometimes calls for help seems to call. "Can you hear me, SOS, help me put my mind to rest," sings Aloe Blacc in the Friends Arena. Thousands equate it with self-reflection. The football stadium was sold out to the very last place. (Photo: imago images / TT) Top DJs such as Nicky Romero, Kygo and David Guetta had previously tuned the crowd to the actual commemorative concert with their sets. Laidback Luke left no doubt with a shirt saying "Avicii Forever" that the DJ and his music should never be forgotten. The Belgian duo Dimitri Vegas & Like Mike ("The Hum") later announced: "We're here tonight out of love for Tim, out of love for his great music!" David Guetta then started with the sounds of Aviciis "SOS" and "Heaven" in his gig. "We are all here today to celebrate a friend," he called out to the crowd. Then he plays a song that he claims to have recorded in his honor the week after Aviciis death. It is briefly quiet around – and then again very, very loud. With the concert Aviciis family and their Tim Bergling Foundation wanted to focus attention on the subject of mental health. All ticket proceeds are to benefit the fight against mental health problems and suicide prevention. The concert should pay attention to the stigma associated with mental problems and suicides, said Father Klas Bergling at the concert. That's why the foundation wants to draw attention to this on every 5th of December from now on. "We miss Tim," he said, "but he's here through his music."