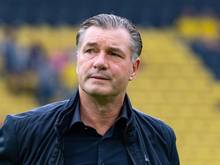 Borussia Dortmund sporting director Michael Zorc has a clear statement on the margins of the BVB Bundesliga match against Fortuna Dusseldorf Erling Haaland (19 "Did you even read a word about this player from me?", Asked Zorc before the match against Fortuna Dusseldorf at the TV channel Sky. "The player belongs to RB Salzburg, it's a matter of respect that you do not speak publicly about players from other clubs, and I do not like that."

The 57-year-old confirmed only again that the BVB wants to commit in the winter "a nine" for the storm. We're working on that, we have some time left, "said Zorc, who clearly rejected a winter change in top English talent Jadon Sancho (19). "We continue to plan with him, he is an elemental player and I do not see any scenario that he leaves us."