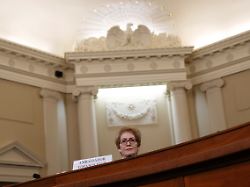 The U.S. Democrats are investigating Donald Trump for his possible involvement with Ukraine. Now Ukraine is investigating itself in Trump's environment. It is about the accusation of espionage.
Ukraine has launched an investigation into the possible illegal surveillance of former US Ambassador Marie Yovanovitch. The police said the police wanted to determine whether Ukrainian or international law protecting diplomats had been violated. At the same time, it was not ruled out that this could have been "bragging or misinformation" in an informal conversation between two US citizens. The Washington Post had previously published a chat conversation that could suggest that a Republican Party congressional candidate the former US Ambassador to Ukraine, Maria Yovanovitch, may have intercepted and monitored. It was only on Tuesday that US Democrats published documents to show that Trump's lawyer Rudy Giuliani, together with a business partner and Ukrainian representatives, tried to force Yovanovitch out of office. She was eventually recalled by Trump, and the cyber police is investigating another case. At the same time, the Ukrainian cyber police are investigating another case that could be related to this. The alleged attempt by a Russian secret service to hack the Burisma gas company's mail servers is related to the ongoing impeachment proceedings against US President Donald Trump. Ukrainian President Volodymyr Selenskyj is said to have put pressure on Ukrainian President during a phone call, saying that Kiev should resume investigations into corruption against the son of the possible candidate for the Democratic Party, Joseph Biden. Hunter Biden was a Burisma board member between 2014 and 2019. The US presidential election is scheduled for November this year.