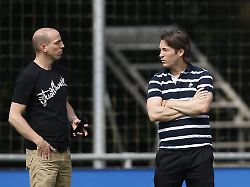 Jan Schlaudraff has to leave the second division soccer team Hannover 96. The "Hanoverian boy" is not even a year as head of sports in Lower Saxony, the chaos in the club continues. Also because of all things Gerhard Zuber takes over his post – who was just getting a judgment against his employer.
First it got Mirko Slomka, now also Jan Schlaudraff – the "Hanoverian boys" are history at 96 just a few months after the restart. "After intensive discussions" between club boss Martin Kind and his managing colleague Björn Bremer, sports boss Schlaudraff was released from the second division football team because of "different views on the central decisions for the future of Hannover 96", such as table 13. announced. And now it is getting interesting and a bit strange – because Schlaudraff's tasks will be temporarily taken over by Gerhard Zuber. The Austrian was once something like the right hand of ex-manager Horst Heldt, but no longer played a role after he was kicked out. After Schlaudraff's promotion in the summer, the 44-year-old lost further skills. 96 wanted to terminate Zuber's contract prematurely, but no settlement could be reached. Jan Schlaudraff played for Hannover for seven years. He was a sports director for less than a year. (Photo: imago images / Joachim Sielski) Only on Wednesday Zuber and Hanover met in court, the parties fought over the supposed end of the contract (2020 or 2021). The court then found, however, that Zuber has an open-ended contract. "Irrespective of legal issues to be clarified by the labor court, Gerhard Zuber enjoys the full trust of the management," said 96. For "the further development of the club" the course must be set in the "coming weeks and months: Clarity, calmness, unity and trust are necessary for this", writes 96.Only damage limitationBut whether Zuber is the right man is up to the Background of the past few weeks are at least doubted. It is clear that Kind's project to get back into the Bundesliga with the old heroes Slomka and Schlaudraff failed a good six months after the relegation. At the launch of the duo at the end of May 2019, Kind reminisced about the furious European Cup -Evenings and made it clear what he expected. Namely the "horror scenario" 2nd league, to end this "sporting and economic disaster" as soon as possible: "The goal is to get back on the rise." In view of the ten points behind in third place, this will no longer work. The successors Kenan Kocak and Zuber are only concerned with damage limitation. Hannover 96 is currently only 13th in the 2nd Bundesliga. The ascent ranks are far away – but the descent zone is only two points away. For Lower Saxony means: The second half of the season is all about preventing the worst possible.