Menu
Home > news > "Protect the SPD from itself": Sarrazin fights against impending expulsion 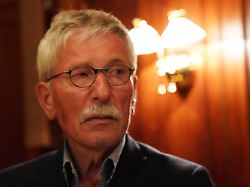 The SPD doesn't want Thilo Sarrazin for a long time, but the controversial author doesn't want to leave the Social Democrats. After the Berlin State Arbitration Commission cleared the way to exclude the party, he announced his appeal.
The former Berlin finance senator Thilo Sarrazin has confirmed that he wants to continue fighting against his exclusion from the SPD. "I'm going to appeal now," he told the Passauer Neue Presse. "After the renewed exchange of briefs, the Federal Arbitration Court will eventually invite you to an oral hearing. I will try again to discuss the content of my book. I want to know what is wrong with it." The decision of the SPD state arbitration commission was announced on Thursday, according to which the SPD may exclude the former Berlin finance senator and best-selling author for behavior that damages the party. The process was triggered by Sarrazin’s book "Hostile takeover: How Islam hinders progress and threatens society", which Sarrazin now said: "I am neither against Muslims nor against strangers. I illuminate critical questions about the religion of Islam and their cultural implications. There is nothing racist about that. Racist is a statement that gives someone inferiority because of their racial, ethnic origin. I am the opposite of a racist. " When asked about leaving the SPD, Sarrazin said: "I want to protect the SPD from itself. I want to continue to honor and fight for the once broad-based People's Party. The path that the SPD has taken will make it possible as a people's party itself. " He had no intention of belonging to a party other than the SPD in his life. The SPD had been relieved by the decision of the arbitration commission on Friday: "I'm really happy," said General Secretary Lars Klingbeil. "Someone who is anti-Muslim, someone who advocates racist theses needs a clear stop sign."