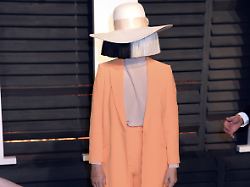 Actually, her interview with "GQ" is only about her non-binding sex friendship with DJ Diplo. But by the way, singer Sia also reveals: She recently adopted a boy.
There are only a few photos of Sia on which her oversized wigs do not cover half of her face. But just like her face, the singer also keeps her private life largely under wraps. In an interview with "GQ", however, she has now dropped a small bomb: She has recently become the proud mother of an adopted son. In 2017, Sia was last photographed without a hat. (Photo: imago / APress) The baby news was not the reason for the conversation with the men's magazine. The reportage in which she had her say was actually about the producer and DJ Diplo. With the 44-year-old has not only recorded hits like "LSD". No, the two also have a kind of friendship plus, as she now reveals. "We spend a lot of our relationship trying not to have sex so that we don't ruin our professional relationship," said Sia.Diplo, "is incredibly hot," said the Australian first. She recently wrote a message to the 41 year old saying, "Hey, listen, you're one of five people who sexually attract me, and now that I've decided to be single for the rest of my life and I just adopted a son, I have no time for a relationship … If you are interested in non-committal sex, let me know! "" With me you have a home "Although Diplo is the" cutest guy in the world " she had never seen a "more insecure man" than him. "He has an incredibly low level of self-confidence. This is so interesting because he is one of the most talented and attractive people in the world. But he doesn't know." Sia has been single for three years. From 2014 to 2016 she was married to film producer Erik Anders Lang. The couple remained childless. After seeing a documentary series called "Foster" about foster children in the USA in May 2019, however, she tweeted that at least made it clear that she wanted to have children. "Hey Dasani from 'Foster'," Sia wrote. "I would like to adopt you. We are trying to find you and have my home checked. But I want you to know that you have a home with me." Shortly thereafter, she deleted the tweet again. It is unclear whether her new adoptive son is really Dasani or another boy. If she protects him as much as her face, the public will probably never see him.