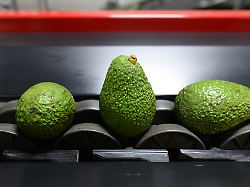 Every year, over 12 million tons of food end up in the garbage in Germany. Now, edible protective covers are to replace plastic packaging, make the fruit last longer and fight waste. Until now, the casings are only available from fruits that you don't take the skin on.
The grocery trade is in a bind. Plastic packaging for cucumbers, avocados and Co. are taboo for more and more customers. But without the protective plastic cover, fruits and vegetables often become unsightly and therefore unsalable. Germany's largest grocer Edeka and Rewe are therefore now testing new techniques to keep sensitive goods fresh for longer, even without plastic packaging. A wafer-thin, edible protective layer, which is applied directly to the skin of the fruit, is supposed to help. At the end of last year, Germany's largest food retailer Edeka began to sell avocados with selected "second skin" in selected supermarkets and net branches. It is said to slow down water loss and oxygen penetration. Both are the main causes of the rapid spoilage of the fruit. Thanks to the coating, the sensitive fruits are supposed to stay fresh for two to three times as long as without the protective coating. According to the manufacturer, the protective jacket developed by the US company Apeel Sciences consists of purely plant-based materials that are found in the skin, seeds and pulp of various types of fruit and vegetables occurrence. It is tasteless, odorless and easy to eat. Edible shells are already on the market. Edeka merchant Falk Paschmann has been selling the treated avocados for several weeks in his supermarket in Düsseldorf-Bilk and raves: "This is a solution to an important problem of our time . " It offers advantages for everyone involved: for customers because the goods stay fresh even longer at home, and for him as a dealer because he has significantly fewer losses. That is probably why Edeka is pressing ahead with the project. Oranges and tangerines, which have been made more durable with the new technology, are now also available in the first markets, as the retail giant announced on Monday. Competitor Rewe is now following suit – with avocados treated with a similar system. The coating here consists of natural sugar, cellulose and vegetable oils and comes from the British manufacturer AgriCoat NatureSeal. It should also be edible and well tolerated. The company announced that the fruits would be sold in up to 860 Rewe and Penny stores this week. "We very much hope that our customers will support us in our fight against food waste by making their purchasing decision," emphasized Rewe manager Eugenio Guidoccio Millions of tons of food in the garbage. The majority of the waste – 7 million tons – is generated in private households. The scientists estimate that every German citizen throws away an average of 85 kilograms of food a year. And efforts to avoid plastic have only exacerbated the problem. According to information from the "Lebensmittel Zeitung", the absence of plastic film for cucumbers has resulted in the fact that significantly more Spanish cucumbers had to be destroyed last autumn because they had not survived the long journey without being damaged. "Cucumbers for the bin," was the title of the journal. Only tested on fruit without an edible peel. Up to now, the new coating processes in Germany are only used for fruits whose peel is not consumed. In the long run, however, the coating could also become common with other products. The US company Apeel, with which Edeka works, has developed recipes for 30 different types of fruit and vegetables, including strawberries, tomatoes, apples and peppers. According to Edeka, it is already preparing an application for approval from the European Commission, and Edeka dealer Paschmann can well imagine that the new technology will also prevail in the future for fruits whose peel is also known. "How often does it happen today that you buy strawberries, eat a few of them and then throw away half the next day because they are rotten. That would then no longer be the case." Customers should be informed beforehand that some convincing work will be necessary beforehand. Under no circumstances should the new method be used secretly or imposed on the customer, he emphasizes. But Paschmann hopes that the benefits will ultimately convince the consumer. He believes that this could lead to "that there is less food waste at all levels". Armin Valet from the Hamburg Consumer Center also welcomes the advance of supermarket chains. But this can only be an element in the fight against food waste. Here the trade has to turn a lot of screws. "There is still too much thrown away. Retail is in demand – with everything that is possible, not just with one method," says the food expert.