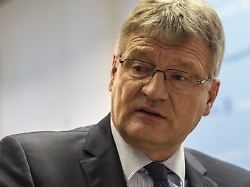 The AfD plans to adopt its social policy concept in April. This also includes the pension over which a dispute has flared up in the party. The AfD parliamentary group leaders in the eastern German states sharply criticize the idea of ​​party leader Meuthen to fundamentally change the previous pension system.
Five AfD parliamentary group leaders from the east have given a clear rejection of party leader Jörg Meuthen's plans for reforming the pension system. Instead of having more financial responsibility, they rely on having children. "With us there are no experiments with the pension. We stand for the German pension insurance," says a joint statement published by Björn Höcke, Andreas Kalbitz, Oliver Kirchner, Nikolaus Kramer and Jörg Urban. Meuthen does not believe that the statutory pension in its current form has a future. In 2018, he had advocated a long-term move away from the "compulsory-financed contribution system" towards "regular private provision". In his opinion, this should be flanked by a restructuring of the tax system. The AfD wants to adopt a social policy concept at a federal party conference in Offenburg on the last weekend in April. The current party program is relatively vague on the subject of work and social issues. In its 2017 election program, the AfD had stated that it would be necessary to "significantly increase the state transfer payments from general tax funds to the pension insurance in order to keep the contributions of working people within tolerable limits". Meuthen now wrote to the members of the Bundestag and members of the party's technical committee on social and labor market policy, about his proposals, rumors and false allegations were being spread by some party members. The pension should in no way be abolished. However, the new "Dynamic Alternative Pension Provision" discussed in the expert committee should not be financed by contributions, but rather from tax funds, according to the letter available to the German Press Agency. That would be fairer – because it should be spread over more shoulders – and would mean better and more secure basic services in old age for the socially disadvantaged. Criticism from the SPD of our people "is a challenge for the statutory pension, because it means that fewer workers have to provide more pensioners. Instead of relying on private provision, the AfD wants to bring about a "demographic change" through a "policy that focuses on families". "Due to decades of undesirable developments in the financial industry and the current zero-interest rate policy, private provision can only be a supplement," she continues in her statement. From the point of view of the deputy chairman of the SPD parliamentary group, Katja Mast, the AfD does not deliver " the only answer to the questions that really matter in pension policy ". The party’s ideas are a backward-looking, wild “smorgasbord of horror”. It is good that "it is now becoming clear that large parts of the party do not want the statutory pension, the basic pension and much more". Anyone who is considering choosing this party should know that. In January Meuthen had already clashed with Member of the Bundestag Jürgen Pohl. Pohl, who belongs to the right-wing national wing of Höcke's party, had accused the party chairman of "party-damaging behavior" on the pension question. Pohl then certified Meuthen as "economic incompetence".