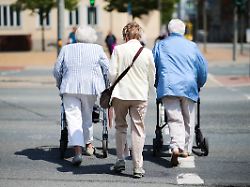 After a long struggle, the grand coalition agreed on an appropriate security in old age with the basic pension. But now a working group of the Union faction provokes violent criticism with a new proposal on the retirement age.
With their reform proposals for retirement, Union politicians have caused violent criticism from the coalition partner SPD. The FDP also did not leave the proposals in good hands. A working group from the Union faction had proposed linking the retirement age to increasing life expectancy. Another suggestion is that higher pension contributions should flow to low-wage earners. The working group of the CDU / CSU parliamentary group wrote in a position paper available to the German press agency that the basic pension could expire in the long term. The Union experts want to use it to accompany the work of the government's pension commission. "Not with us" The SPD faction's social policy spokeswoman, Kerstin Tack, said: "There will be no increase in the retirement age with us." Low-income people would have a lower life expectancy than the wealthy. "Especially people with low income would spend less time in well-earned retirement," said Tack, "and it would also be a pension cut, especially for those who work hard and earn little," the SPD politician continued. Despite rehabilitation and prevention, it would be difficult for them to participate in working life for longer than 67 years. Instead of increasing the retirement age, the SPD is focusing on strengthening the principle of "prevention before rehabilitation before retirement and care" so that retirement is possible in good health. Liberals also reject the proposal proposed higher pension contributions for low earners. "It is right to ensure that low-wage earners receive a good pension, but for that to happen, the Union and the SPD should finally talk about the future viability of the pension system as a whole and, for example, make capital coverage better," he said. The Union proposal is not a permanent tool against poverty in old age, and the core of the problem is still not understood. "Only one percent of those who have 35 or more years of insurance are at risk of poverty in old age." Instead, Vogel campaigned for the FDP model of a basic pension, according to which part of the pension should not be counted towards basic security in old age. Vogel criticized the debate over the retirement age as "crippling". With a flexible retirement age, people should decide for themselves when to retire.