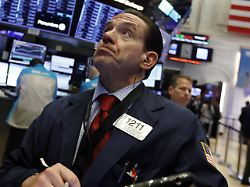 Black day for the US stock exchanges: The further spread of the corona virus pulls prices down sharply at the start of the week. Airlines and technology companies in particular are among the losers of the day. In contrast, government bonds benefit from the uncertainty on the markets.
The corona virus, which is spreading more and more worldwide, has sent the US stock markets on the downswing at the start of the week. The Dow Jones Industrial, which reached a record high at over 29,500 points two weeks ago, dropped by around 1,030 points to 27,962 points. The market-wide S&P 500 lost 3.4 percent to 3,226 points and the technology-heavy Nasdaq 100 index lost 3.7 percent to 9,221 points. By contrast, government bonds were in demand as "safe havens" in the wake of investors' aversion to risk. Ten-year US bonds have risen to their highest level since summer 2016. Experts are now skeptical as to whether the global spread of the new corona virus can still be stopped. "The time window for containment of the outbreak is now closing very quickly," quoted the British newspaper "The Telegraph" Devi Sridhar from the University of Edinburgh, which conducts research on global public health. Goldman Sachs analysts have now revised down their gross domestic product (GDP) estimates in the United States. Instead of annual GDP growth of 1.4 percent in the first quarter, they now expect growth of only 1.2 percent. Above all, they pointed to a slower than previously expected recovery in economic activity in China and to the travel industry. Apple and Microsoft also lose S&P 500 3,229.50 Stocks of companies directly affected by the consequences of the infectious disease came under pressure, such as travel and airline companies, booking portals or health insurance. In the Dow, UnitedHealth shares came in last with a minus of 7.3 percent, on the Nasdaq American Airlines took last place with a minus of 10 percent and the online travel portals Booking Holdings and Expedia Group also showed a minus of 6.2 percent 8 percent very weak. Nasdaq 100 9,079.63 However, technology stocks that were heavily dependent on global economic development were not spared, because if production comes to a standstill or slows down, supply chain bottlenecks become noticeable and demand weakens, this also affects this industry directly. Apple and Microsoft lost around 4 percent in the Dow. The few winners included stocks of consumer goods manufacturers, telecom providers and pharmaceutical manufacturers that were considered defensive and therefore less cyclical. Here, Gilead Sciences' stake rose by 3.4 percent and at times reached its highest level since autumn 2018. The biotech company has developed a remedy in Remdesirvir that has only recently been shown to be effective in clinical studies in Wuhan. Courageous investors are obviously speculating on possible groundbreaking successes. Regeneron Pharmaceuticals also grew by 4.3 percent. The company announced earlier this month that it was working with the United States Department of Health and Social Services (HHS) to develop antibody treatment to help fight corona virus.