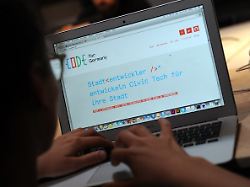 It is an unprecedented initiative of volunteering: for almost 48 hours this weekend, 43,000 people work together on digital solutions against the corona pandemic. The federal government is enthusiastic and promises quick implementation.
The Federal Government has promised to implement the best ideas and solutions from the #WirVsVirus hackathon as quickly as possible. Nearly 43,000 people took part in the 48-hour event to program and design apps and other solutions to deal with the corona crisis. "It was obviously the largest hackathon that was ever carried out worldwide," said Chancellor Minister Helge Braun. The participants from home and abroad have agreed to contribute their own ideas and take measures against the virus. "Our country and the whole world is in a serious situation," said Braun. "And it is really great that so many volunteer to help do things that the Federal Government could not have done on its own." Digital Minister of State Dorothee Bär had previously praised the speed of the project. She was also impressed by the "community cohesion" and the performance of the teams and the organizers. Almost 2000 projects were worked on over the weekend. Around 100 projects came from the federal government. A jury is to select the best projects by next weekend. The #WirVsVirus campaign was initiated by the German government and Tech4Germany, Code for Germany, Impact Hub Berlin, ProjectTogether, SEND e.V., Initiative D21 and Prototype Fund. "We came together across sectors to work together to create a digital space in which solutions to the challenges posed by Covid19 could be worked on," said the organizers.