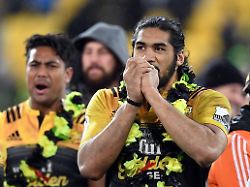 When Michael Fatialofa injured his spine during a game in the British rugby league, he became a case of care. Now – just a few months later – he can suddenly walk upright again, astonishing even his doctors.
It's a miracle, but just two months after a serious spinal injury, New Zealand rugby player Michael Fatialofa is able to walk on his own again. The 27-year-old had injured himself on January 4 just one minute after coming on as a substitute in the game of his club Worcester Warriors and was subsequently paralyzed from the neck down. "You are an eyewitness to a miracle that even the doctors cannot explain," his wife Tatiana wrote on Instagram, and posted a video story that shows her husband walking slowly in a clinic. She also shared a video of how Fatialofa found it difficult to put a fork to his mouth. Ten weeks ago, her husband was a nursing case, "completely paralyzed from the neck down, and now that". Because of the corona pandemic, Tatiana is currently only allowed to visit Michael in the hospital in exceptional cases. A charity game scheduled for Fatialofa's benefit on April 11 was also canceled. The season in the UK's first rugby league, in which Fatialofa plays for the Worcester Warriors, is currently suspended until April 14th.