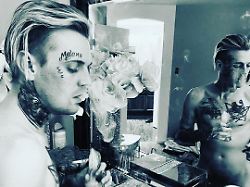 Earlier this year, Aaron Carter informed his fans that he had found great love. He even got his new girlfriend's name tattooed on his face. But now it is over, because domestic violence is said to have occurred.
Aaron Carter is simply out of luck. Nothing really runs smoothly in his life. His career is idle, he struggles with all sorts of psychological problems, his tattoo artist rarely shows skill, and love just doesn't work either. Everything looked so good at the beginning of the year. At that time, the 32-year-old posted a photo of himself and his new girlfriend Melanie. Now pictures with her have disappeared and only the word "single" is emblazoned in his profile. His latest post also goes with it. In a black and white photo you can see the singer standing bare-chested and smoking in front of the bathroom mirror. Here, too, "Single" appears as a hashtag. Also not to be overlooked is the tattoo over Carter's right eyebrow. There is the name of his loved ones, only in early March did he have his love tattoo set for her. And now suddenly the separation, but it happened for a good reason. Melanie is said to have said that she was pregnant by Carter, but he did not believe her, reports the US promiportal TMZ and appeals to the artist himself. As a result, a tangible argument ensued, which emanated from Melanie. The police had to move in and arrested the model for domestic violence. Carter tweeted that he hoped she would get the help she needed. A sentence that just seems strange from his mouth, because otherwise he is actually the one about whom such things are said. On a US TV show last year, he admitted to suffering from mental health problems and being dependent on numerous medications. A court ruled in November that he had to surrender his weapons because of this – much to his displeasure. For years he has been in a clinch with his big brother Nick Carter because of his behavior.