Menu
Home > news > Austria makes them a must: Must you wear a mask in a supermarket? At first not 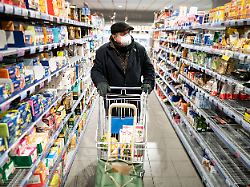 Proximity to other customers is often difficult to avoid in supermarkets – this can lead to infections with the corona virus. Does Austria have to wear a mask when shopping in Austria? The debate is on.
A duty to wear a mouthguard in supermarkets modeled on Austria is currently not an issue in Germany. Such protection is "perhaps a useful addition to the already applicable hygiene rules," said government spokesman Steffen Seibert in Berlin. However, this should not lead to "a wrong feeling of security" and the rules such as keeping your distance, washing your hands and avoiding contacts would no longer be observed. The SPD health expert Karl Lauterbach told the editorial network Germany (RND): "From a medical point of view, I personally think such a provision makes a lot of sense." The importance of masks to curb the spread of the coronavirus was initially greatly underestimated. However, the prerequisite is "that there are enough masks and that they are not missing from the medical staff". According to the RND report, such a mask compulsion would be legally possible in Germany. However, it would have to be ordered by the federal states or the local health authorities. An RND survey among the 16 federal states has shown that there are currently no corresponding plans at the state level.Söder and Kretschmann are considering However, the Bavarian Prime Minister Markus Söder said in Munich with regard to the obligation introduced in Austria: "To be honest, we are concerned with the idea also." Baden-Württemberg's Prime Minister Winfried Kretschmann advocated the use of self-sewn simple protective masks for shopping and public transport. However, no commitment should yet be made, he told the RND newspapers. Foreign Minister Heiko Maas was open to a duty to wear a face mask when shopping. "If it makes sense, you shouldn't rule it out," he told Bild. Austrian Chancellor Sebastian Kurz had announced that face masks would be distributed to customers in the markets from Wednesday. It would take a few days. As soon as all markets are equipped with the masks, wearing a face mask when shopping becomes mandatory. Self-made masks were also accepted; at the weekend, retailers in Berlin and Brandenburg had already asked supermarket customers to wear a face mask when shopping. "The more people wear it voluntarily, the more they protect others," said association chief executive Nils Busch-Petersen. "We are also happy to have a smile behind the face mask."