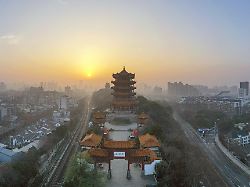 While the number of infections continues to rise in Europe, China seems to be getting the spread of the coronavirus under control. According to the authorities, there have been no new infections in the country for days. In Wuhan, the epicenter of the pandemic, people are even allowed to step outside again.
Small groups of people leave their homes in Wuhan after weeks of isolation, visit grocery stores or take to the streets for the first time since the drastic quarantine measures in late January. Normality cannot yet be said in the city, which has been badly hit by the corona virus. But at least a little bit of everyday life is returning to the lives of most Chinese there, and China has loosened the strict restrictions to contain the corona virus across the country. Curfews have been partially lifted. Even in the province of Hubei and its capital, Wuhan, from which the Sars-CoV-2 virus has spread worldwide since the turn of the year, people are allowed to step outside the door again. According to the authorities, buses and subways run and checkpoints are dismantled. The first train arrived in Wuhan at the weekend, bringing in more than 1,000 workers from other parts of Hubei province, and local authorities announced on Sunday that residents could return to work, albeit with conditions: they must not and must not have a fever Present a certificate from your employer and a so-called green health certificate for your virus-free status. Non-residents who have been stranded in Wuhan since the entry into force of the strict travel restrictions on January 23 can also start applying for an exit. "Wuhan gives hope to the rest of the world." With the easing, the Chinese government is spreading cautious optimism. For five days in a row, no one had been infected with the virus within the country, reports the national health commission. This also applies to the Wuhan epicenter. All 39 new cases reported on Sunday were brought into the country from outside. The new infections are mostly Chinese students who have returned home because universities in Europe and the United States are being closed to contain the virus, it said. However, many experts doubt the official government figures. China had changed the test methods several times, causing confusion among international observers. The exact number of cases can therefore hardly be checked independently. The fact that they have dropped sharply recently is largely undisputed. "The trend can be believed on the whole," said China expert Maximilian Mayer of the University of Nottingham in an interview with ntv.de. Therefore, the rest of the world looks hopefully towards China, while the virus is mainly in Europe and USA continues to spread. The World Health Organization (WHO) is also fueling confidence: "Wuhan gives the rest of the world hope that even the worst situation can be turned around," said WHO chief Tedros Adhanom Ghebreyesus in a press conference broadcast on Friday. China demonstrates competence and solidarity, however: The danger of the corona virus is far from over in China – and there is great fear of a second corona wave. Hubei residents are still unable to move freely around the country, reports the British Guardian. In addition, most residents are still very afraid of being infected and will be careful not to take to the streets. And there is still no normality in Beijing. More and more restaurants are opening in the capital and the first brave people even dare to take to the streets without a respirator. However, the government continues to try to shield the Greater Beijing area from the virus as much as possible. In principle, the few international flights are no longer allowed to land at one of the two airports in the capital, but are diverted to one of the neighboring provinces. Upon arrival, all passengers on board must go to dedicated quarantine centers, and nothing is known officially as to whether important representatives of the Communist Party, business and the Chinese military are infected with the corona virus in and around Beijing. Because the Chinese government wants to demonstrate with all its might: The party leadership has stopped the spread of the virus with a strong hand. The crisis is over. The rest of the world can learn something from China, the message is. China is now sending medical aid and donations to virus-plagued Europe.