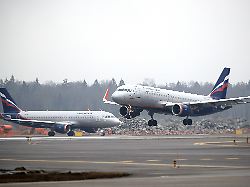 So far, strict quarantine regulations have been in place for people entering Russia. Now entry and exit are further restricted. The government has ordered all flight connections abroad to be stopped. Russians stuck abroad are to be brought back.
Russia has suspended almost all international flights since Friday due to the coronavirus pandemic. According to the state agency Tass, the government in Moscow ordered this. This does not apply to flights that are intended to bring Russians who are stuck abroad back to their homeland. Domestic flights are not affected by the regulation. Air traffic to Germany, for example, had recently been cut back significantly. The airline Aeroflot only flew to Berlin. Lufthansa has already discontinued its routes to Russia, as can be seen from the online information. Anyone who has traveled to Russia so far has strict quarantine regulations: As in many other countries, travelers in Russia had to remain self-isolated for 14 days. They also had to leave their contact details. A stopover for the flight of an air force machine that brought 102 Germans and 26 citizens of other countries back from Wuhan, China, had already been denied by Moscow in early February. This had led to a diplomatic quarrel. According to official information, 658 people have been infected with the corona virus so far (as of Wednesday). The virus has so far been detected in three deceased people. However, there are doubts about this statistic because there are no comprehensive tests. On Tuesday, Moscow Mayor Sergei Sobyanin admitted that there are probably more people across the country infected with the corona virus. According to him, the authorities have no "clear picture" of the extent of the crisis because little testing is done. Vladimir Putin had declared the coming week off from work to curb the spread of the virus.