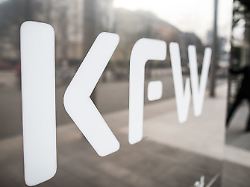 The rampant corona virus poses major challenges for companies across industries. Missing orders reduce revenue while operating costs remain the same. The federal government wants to help those who have problems.
The federal government plans to improve special loan programs for medium-sized and large companies in the corona virus crisis. Accordingly, the state promotional bank KfW should now assume 90 percent of the credit risk instead of 80 percent of working capital loans, as reported by the dpa, citing the Ministry of Economic Affairs. Details are currently being finalized, it said. According to coalition circles, Economics Minister Peter Altmaier informed economic politicians of the black-red coalition and the opposition about the move on Saturday evening. In view of the impending bankruptcy, business associations had previously criticized overly complicated programs for emergency loans and called for improvements. Aid should now reach the companies as quickly as possible to ensure liquidity. Altmaier and Minister of Finance Olaf Scholz announced an unlimited loan program more than a week ago to ensure corporate liquidity in the face of the dramatic economic consequences of the coronavirus crisis. The state development bank KfW and the banking industry said last Wednesday that companies could apply for aid now, and KfW has so far offered commercial banks up to 80 percent of the credit risk, depending on the program. This should make it easier for financial institutions to grant loans. The development bank receives state guarantees for this. A spokeswoman for Altmaier announced on Friday that the aid should be available as of Monday. Federal government provides billions in aidFamily companies, for example, had criticized "construction defects" in the programs. Rainer Kirchdörfer, board member of the Family Business Foundation, said: "First experiences of family businesses show that there are long credit checks and dramatic bottlenecks." The companies concerned would have to be quickly provided with liquidity. "This is only possible with fast-track flat-rate permits." In addition to the special loan programs, the federal government is planning further billions in aid for the economy to prevent a permanent crash. On Monday, the cabinet is supposed to get help for the self-employed and small companies. A state stabilization fund is also planned, which, if necessary, also provides for state participation in large companies.