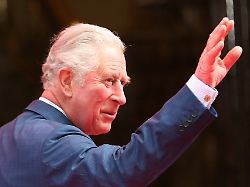 The reports of celebrities infected with Corona never stop. Prince Charles is now among them. The official residence of the British prince is now announcing.
Tom Hanks, Friedrich Merz, Oliver Pocher, meanwhile numerous celebrities from all areas have become infected with the corona virus. Prince Charles now belongs to them. The Prince's official residence, Clarence House, announced in a message that the 71-year-old's test had been positive. Apparently he has not yet contracted Covid-19. "Prince Charles tested positive for the corona virus. He showed mild symptoms, but is otherwise in good health and has worked from home as usual for the past few days," the statement said. His wife, Duchess Camilla, who was one year older, was also tested, but with negative results. Now the two are in quarantine in their home in Scotland. The number of infections continues to rise Like the rest of the UK and actually the whole world, the British royal family is naturally also concerned about the Corona crisis. After all, some of its members are of critical age. The Queen is said to have already left Buckingham Palace, as "The Sun" announced in mid-March. "The Queen has met a lot of people lately, but it's only a few weeks until her 94th birthday and her advisors think it's best to take her off the line of fire," the newspaper quoted an insider. The queen had previously postponed several appointments due to the rapid expansion. So far, 422 people in the UK have died of Covid-19, and the number of confirmed infections has now reached 8077. A three-week curfew has been in effect there since Monday night, but the London Underground is still completely overcrowded.