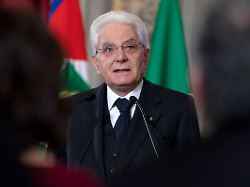 Times are gloomy in Italy, and the president's recent television address turns out accordingly. Sergio Mattarella not only warns of the threat of the pandemic, but also causes a moment of serenity with a breakdown.
Italy's President Sergio Mattarella has won the sympathy of his compatriots in an unintentionally funny situation: When the head of state, who was extremely respected in Italy, prepared, coughed and cleared his throat for a speech on television on Friday, the voice of his adviser Giovanni Grasso came off-screen, which he heard asked to straighten a rebellious strand of hair. The 78-year-old president initially met the request without much conviction and then said: "Eh Giovanni, I am no longer going to the hairdresser." Mattarella's appearance was broadcast in all media without the scene in question, which was not intended for broadcast, being cut out. The presidential palace later apologized for the mistake, but the scene on the other hand caused amusement and sympathy in online networks: the hashtag #ehGiovanni spread extremely quickly.Appeal to EuropeIn his speech, the second since the beginning of the coronavirus pandemic in Italy, Mattarella appealed urging European leaders: "Everyone must understand the seriousness of the threat to Europe before it is too late." Italy is the country most affected by the coronavirus pandemic. More than 9000 people have already died from the lung disease Covid-19 caused by the new coronavirus. More than 85,000 people have been infected.