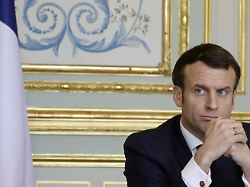 Italy feels let down by Germany and France in the corona crisis. France's President Macron does not want to be left with this impression and calls on the EU to act together. His biggest concern is that everyone acts for himself.
French President Emmanuel Macron has called on the EU to act together in the fight against the corona crisis. "I don't want a selfish and divided Europe," he said in an interview with the three Italian newspapers "La Stampa", "La Repubblica" and "Corriere della Sera". "We will not survive this crisis without strong European solidarity in health and financial terms." He called for joint action to finance spending in this crisis. "The number is of secondary importance, it is the signal that counts." The EU heads of state and government had not been able to agree on financial crisis aids on Thursday evening despite hours of discussion. France, Italy, Spain and other countries call for joint borrowing, but are biting granite on Germany, the Netherlands and others. Chancellor Angela Merkel reiterated her rejection of so-called corona bonds after the video summit. France and Germany also sent material Macron said in the interview that ten countries had supported the idea of ​​corona bonds at the European Council, making it the one most affected by the crisis Countries can be helped. Some countries such as Germany were cautious. The debate on this should continue in the coming weeks. "We cannot give up this fight." Macron complained that there was a lot of talk about Chinese or Russian aid. But why is it not said that France and Germany have sent two million breathing masks and tens of thousands of protective suits to Italy. That is not enough, but it is a start. The Europeans also helped China at the start of the pandemic and sent 50 tons of material. "Europe has to be proud and feel strong, and that's it." Macron said some countries acted as if Italy or Spain were responsible for the crisis. They are the first victims, this virus will not spare anyone. The disease worries him: "Everyone for himself". Macron said: "We must do everything we can to stop the virus from spreading, but always act as Europeans."