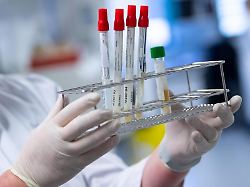 In many countries, tests for the corona virus are in short supply, so there is a strict regulation of who is tested. In Norway, people are now going a different way – people should be chosen at random.
In order to get a better picture of the spread of the coronavirus, Norway wants to test people without symptoms. The Norwegian health authorities are preparing to initiate such random tests, reports the Norwegian radio broadcaster NRK. A representative of the national health institute said the broadcaster is currently clarifying how this should be carried out and financed, and the aim of such random tests is to be able to better assess the actual spread of the coronavirus. The model is supposed to be Iceland, which in record time had put through most of the tests in terms of population based worldwide. According to the Icelandic government, 12,000 of the approximately 360,000 inhabitants, including thousands who were symptom-free, had been tested on the North Atlantic Island by the middle of the week, the ultimate goal being to test the entire population. According to the authorities, 4102 infections were detected in Norway by Sunday. 22 people have died after a coronavirus infection, their average age was 84 years. To date, around 85,000 people have been tested on Sars-CoV-2, which means that the tests were positive in around four percent of people.