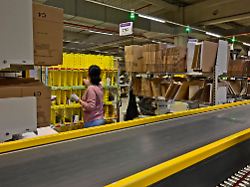 The shopping streets in German city centers are swept empty. Even if the assumption is obvious: online business does not benefit from branch closings across the board. All online retailers are affected by a crisis-related slump, says retail expert Heinemann ntv.de. With one exception. ntv.de: Is the corona crisis the end for stationary retail? Gerrit Heinemann: That is a very steep thesis. The stationary trade is not completely finished. Finally, the grocery retail and drugstores are still open. This means that half of the German retail sector is not affected. On the contrary: the mail is going off right now. In addition, hardware stores and garden shops are still open. The Corona crisis and store closures affect approximately a quarter of total retail sales, but three quarters of all stores. Who really hits it are small local retailers in the city center who do not have an online shop. Can the lost sales from the branches be compensated online? Gerrit Heinemann is an e-commerce expert at the Niederrhein University of Applied Sciences. (Photo: Recordbay) Branch chains will find it difficult to make up for lost sales from online shops. The infrastructure of online shops, the packing of packages – many of them cannot start up all of a sudden. The companies I speak to have very different online shares in the market depending on the product group. No one is surprised that books and other media are in high demand on the Internet. Well over 40 percent have already been sold online here. Many bookstores do not yet achieve this share with their own online shops. There are individual exceptions such as Thalia, which make up 25 percent of their sales online. However, they are still below the market average. Media Markt and Saturn, in particular, are significantly lower at 10 percent. Even if the assumption would be obvious: the online business does not benefit from branch closings across the board. At online retailer Zalando, for example, demand is even falling; fashion retailers missed the start of the summer season in late February because deliveries from China failed to materialize. There are significant bottlenecks in the range and delivery. In March and April, at least 50 percent of summer goods are usually sold. If the goods are simply not there, then Zalando will also notice. Which online shops are currently doing bad business? Basically, one can say that apart from groceries, a drop in all online retailers can be seen due to the crisis. The search volume on the Internet, as can be seen from the search queries on Google, fell significantly in March. These are typical behaviors of a recession: consumers simply buy less out of fear, and online grocers are particularly popular at the moment. Demand has exploded in the past few weeks. Delivery dates two weeks after the order date have long been normal. Does the industry make it out of the niche with the corona crisis? Online grocers are also reaching their capacity limits. They cannot be started up at the push of a button. If a customer needs food, he wants it to be delivered quickly. It takes a little revenge. Even if such providers initially indicated a big plus, at the latest when customers get their goods too late, they are considering going to the open supermarkets around the corner themselves. In addition, very high minimum purchase amounts and delivery fees deter many. I don't think the corona crisis is bringing a new generation of customers to online supermarkets. What is the advantage of Amazon over other online retailers? Amazon's range of products is unbeatable. Customers quickly find what they are looking for and appreciate the speed of delivery. There are more than 18 million Amazon Prime members in Germany. It is becoming apparent that an Amazon Prime customer is lost to the rest of the retail. With its own delivery, Amazon is not dependent on the delivery services, which take longer and longer and do not deliver so reliably. I estimate that at least a third, if not more, are now being delivered by Amazon itself. Amazon is the clear winner of the Corona crisis. To what extent is even Amazon reaching its limits with increasing demand? I don't know which limits Amazon should reach. So far, neither the legislature nor the cartel office have managed to stop Amazon. Organic growth gives the Bundeskartellamt no reason to intervene. I wouldn't be surprised if one day Amazon had a similar market share to Google. Amazon is unstoppable. Will Amazon emerge even more from the crisis? Absolutely. On the other hand, you also have to see that many small stationary retailers can now compensate for part of their lost sales in the marketplace. Almost two thirds of the Amazon trade volume is made on the marketplace with sellers or partners, which also include some of the local traders affected. Even without their own online shop, some of them make considerable sales here. The same applies to eBay sellers, who are mostly smaller dealers. Will shopping habits in Germany change sustainably as a result of the Corona crisis? Customers will certainly pay more attention to hygienic standards in shops in the future and think twice about doing their shopping at busy times. Consumers will remember for a long time that overcrowded shops are a health risk. Certainly, the Corona crisis will also affect payment behavior. In the future, many consumers will want to do without dirty cash and, for example, make contactless payments with their cell phones. To do this, the banking industry must also significantly increase the amounts that can be paid without contact. Juliane Kipper spoke to Gerrit Heinemann.