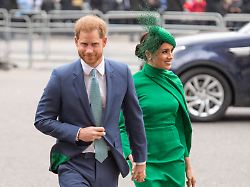 After withdrawing from the first guard of the Royals, Prince Harry and his wife Meghan would definitely have time for new fields of activity. It would be possible, for example, that they will soon be heard on the "Simpsons". In any case, the producers of the series would not mind.
Prince Harry and his wife Meghan are definitely having other concerns right now. They too have to deal with the corona pandemic, especially since Harry's father Charles has now been tested positive for the virus. Hopefully, a normal life for the two of them will begin again someday. The only question is what it will be like after you have renounced your royal obligations. In any case, a new job offer now appears to be concrete. The 35-year-old and his wife, who are three years older, are supposed to have a guest appearance in yellow in the cartoon "The Simpsons". The show's makers apparently also hope that the two of them will give their characters their voices as well. "We talked about Harry and Meghan. I heard that she was interested in voice-over work," said "Simpsons" producer Al Jean media reports said the Radio Times magazine said. At the same time, he asked the grandson of Queen Elizabeth II and his wife to report to him. Many stars have already made guest appearances in yellow at the "Simpsons", including Lady Gaga or Elton John. The Duke and Duchess of Sussex planned to make a living with voice-over and documentary films on important issues such as mental health or climate change, the Daily Mail reported, citing alleged insiders. Meghan is also said to have already signed a voice over deal with Disney, and Harry and Meghan are no longer making public appearances as members of the British royal family and want to make a living independently. From April 1st, they will no longer officially have the title "Royal Highness". They currently live in Canada, where they live with their ten-month-old son Archie.