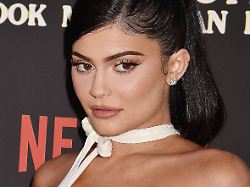 According to Forbes, she is the youngest billionaire in the world. And so Kylie Jenner can not be ragged in times of crisis. The 21-year-old donates a million dollars for protective clothing and respirators. And Angelina Jolie also reached deep into her pocket.
There is definitely no shortage of money for the world's youngest self-made billionaire, Kylie Jenner. According to Forbes, it has assets of the equivalent of 116 million euros. A part of it, more precisely a million dollars, has now been donated to the fight against the corona virus. The noble gesture would probably never have made it to the public had it not been carried out by a doctor via Instagram. In a long post, Dr. Thaïs Aliabadi at "Engel" Jenner for their big heart. "I am speechless. My eyes are full of tears of joy and my heart is filled with gratitude," Aliabadi begins her Instagram post, which shows a photo montage of her and Jenner. "One of my patients, a wonderful angel on earth, just donated a million dollars to help us buy hundreds of thousands of breathing masks (…) and other protective clothing." "You are my heroine" Jenner helped with her contribution The doctor is certain that she will save many lives. "You are my heroine. (…) Our world is a better place thanks to you. I love you so much," Aliabadi ends her post. Kylie Jenner is Kim Kardashian's younger half-sister. Among other things, she has her own cosmetic brand with "Kylie Skin". Hopper HQ's Instagram Rich List last year also revealed that it made $ 1.2 million from a single post on the social network. This made her the leader for the second time in a row. Jenner has 167 million Instagram subscribers, and Angelina Jolie has also made a million dollars loose. Your money is given to the "No Kid Hungry" initiative, which brings food home to children who are unable to attend school meals due to school closings in the United States. For many of them, it's the only meal of the day.