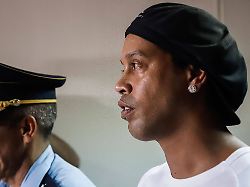 His lawyers would have liked to have prevented it, but now it is happening: Ronaldinho, world champion, world footballer and Brazilian idol, is spending his 40th birthday in prison. In fear and without their own toilet.
With the light-footedness with which he once dribbled past man and mouse, Ronaldinho escaped from reality these days. An 11: 2 of his team without a name went against the others with five goals and six assists on the cap of the global football idol alone. But the Brazilian’s greatest moments are no longer taking place on the world's major football stages, captured by millions of fans and admirers. No, the 11-2 did not shine over the walls of a prison in Paraguay, captured in fragments as a photo and video sequence on a cell phone. Ronaldinho is in jail. When the ball artist, who was named the best player in the world in 2004 and 2005, celebrates his 40th birthday on Saturday, he may grant revenge to the humiliated. There is no more party fun. The Brazilian citizen Ronaldo de Assis Moreira has been in custody since March 6 in the "Agrupacion Especialiada", a barrack of the National Police in Asuncion. Because two days earlier he had flown in on the side of his older brother Roberto Assis, leader of the family since the father's untimely death, with a false passport and identity card. The Paraguayan documents unjustifiably identified him as a natural subject of his little neighbor: fear and no toilet. The brothers de Assis Moreira during an arrest date. (Photo: imago images / Agencia EFE) For example, the former Barcelona star, who achieved the highest consecration with the Catalans in the 2006 Champions League, and his foster brother, who was Swiss champion with FC Sion in 1997, squat in a five by five Meter narrow cell. In front of a stove, a minibar and a television. After all, the door to the courtyard is open – but only because there is no toilet in the room. "Ronaldinho finds his fun playing football," the guard responsible for the detention center told UOL Esporte, but also reports of the Moreira brothers' fear of dengue fever . "We really have a lot of mosquitos here," admits Blas Vera. Back to the mysterious case: 15 people have already been arrested, only the main suspect has disappeared without a trace. Dalia Lopez is said to have turned over $ 400 million in the past five years, with bogus companies, as money laundering, under tax fraud, even in connection with drug trafficking. And so Ronaldinho continues to serve as a trophy for a large-scale clean-up campaign in Paraguay, which is plagued by corruption. The corona pandemic has meanwhile also made Asuncion a ghost town. And complicates the applications from Ronaldinho's lawyers. Because the local judiciary works on the back burner. In any case, there is a risk of flight and the concern of the judiciary regarding obstacles to the educational work against a release of the brothers. The responsible public prosecutor's office recently announced that Ronaldinho would be happy to receive guests, so it remains unclear why the photo of the 2002 world champion used in the falsified documents was found on thousands of balls in Lopez's apartment. Ronaldinho was allegedly invited by the Paraguayan to give her social project a face. Which makes you pay attention: As a Paraguayan citizen, he and his brother would be better able to get to shops in the country, costing the papers $ 6,000 each, according to the first testimony ordered by Lopez. A stick of paper on the $ 1.6 million that Ronaldinho's lawyers offered as bail to relieve house arrest. The judge is said to be too little given the ownership of the only footballer who won the Champions League, Copa Libertadores and World Cup and was also elected world footballer. "Every day there are a few boys who want to go in. Ronaldinho is happy to welcome them," said prison manager Vera . The autograph hunters come in Barcelona or Selecao jerseys. The dribble artist remains highly valued by the fans. Even if it could fall bottomless in Paraguay.