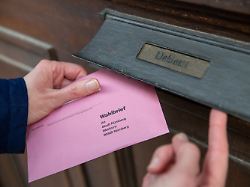 In the second round of voting, the SPD candidate prevails again in the local elections in Bayer in Munich. In contrast, there is a serious disappointment for the social democrats in Nuremberg.
The SPD has lost its traditional stronghold of Nuremberg to the CSU. In the runoff election for the Lord Mayor's Office in Bavaria's second largest city, CSU candidate Marcus König prevailed against SPD applicant Thorsten Brehm. In Munich, however, incumbent Dieter Reiter from the SPD remains in office. After counting about two thirds of the ballot papers, he was clearly ahead of CSU applicant Kristina Frank. In Nuremberg, the popular SPD Mayor Ulrich Maly had given up another candidacy after 18 years. So far, only the SPD has been the mayor in the Franconian metropolis since the Second World War, with the exception of the years 1996 to 2002. CSU man König took 52.2 percent in the second round and was able to beat Brehm, who came to 47.8 percent. After counting two thirds of the ballot papers, it was over 70 percent approved. The counting was interrupted on Sunday evening and should not be completed until Monday, and CSU candidate Frank Reiter congratulated him on the election success even before the final result. "May he guide our city safely and with a steady hand through the stormy times ahead." Reiter had narrowly missed the absolute majority in the first ballot. However, his SPD slipped to third place in the city council election behind Greens and CSU. Bad luck for the CSU in IngolstadtIn Ingolstadt, the CSU had to vacate the post of mayor after almost 50 years. Her previous incumbent Christian Lösel surprisingly lost 40.7 percent against SPD applicant Christian Scharpf, who won 59.3 percent. The Ingolstadt CSU was shaken by a bribery scandal involving Lösel's predecessor Alfred Lehmann, who was sentenced to a suspended sentence last year. Meanwhile, the CSU held the upper hand in Augsburg. Her incumbent Kurt Gribl had decided not to run again; in the run-off election, Eva Weber (CSU) won 62.3 percent against Dirk Wurm of the SPD (37.7 percent). Weber is now the first mayor of Augsburg, and the second round of local elections took place solely as a postal vote due to the corona crisis. Because there were so many open decisions in the first ballot two weeks ago, there was a high number of run-off elections – 16 out of 24 mayor posts alone had to be assigned in round two, plus various district councilors and mayors. As a result of the security measures, the counts take longer than usual. In Regensburg, for example, it should only be counted Monday.