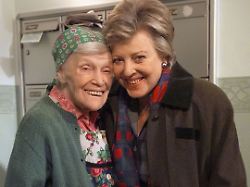 The last episode of the longest-lasting German soap opera of all time is on Sunday. The "Lindenstrasse" says goodbye after more than 34 years – with a big bang? Or does it disappear from the weekly TV program with soft tones?
Does everything end up on "Lindenstrasse"? Is there a farewell sirtaki directed by inventor Hans W. Geißendörfer in front of the "Acropolis"? It is still top secret how Germany's longest-lived soap victims leave TV life on Sunday. But also the 1758th and thus last episode is supposed to arouse curiosity with one of the legendary Cliffhangers – and a star of the first dream dreams of a comeback in a film. The last day of shooting is long gone, in December the crew of the WDR production was again in front of the cameras. But the "Lindenstrasse" would not be the "Lindenstrasse" if the makers did not, as always, add a dash of topicality. The Corona crisis made it into one of the most recent episodes with a radio message from Mutter Beimer. The first episode ran in 1985, but the fact that Corona also plays a role in the series produced in Cologne on a Munich residential street no longer causes any sensation. The role as the German heart rate monitor slowly lost the "Lindenstrasse" – and also the role as one of the nation's excitement. When the first episode was on December 8, 1985, it was completely different. Although the criticism tore up the series based on the British model "Corronation Street", alleged amateur actors were mocked. But the audience took their "Lindenstrasse" to their hearts. The audience quickly increased to around 15 million viewers, on Sunday evenings the Germans sat in front of the TV as naturally as now only at "Tatort" and football. And on Monday they talked at work about what happened to the Beimers, Zenkers or Dr. Dressler was just going again. Topicality with social problems Especially the Beimers with their three children became a reflection of many everyday problems. Father Hans soon cheated with Anna Ziegler. When mother Helga noticed that the woman was pregnant, she threw him out. Marie-Luise Marjan, in particular, played a role as the new mother of the nation – with such an intense way that it jumped from television to real life. A few weeks ago, Marjan told the "Süddeutsche Zeitung" that her film son Klausi would eventually go home had come and asked his birth mother: "Mom, who is my mom now?" The authenticity in everyday dealings, plus the constant topicality with social problems – this was probably one of the reasons for success in the early years. At the end of 1988, the character Benno Zimmermann died of AIDS – the sixth of 56 series deaths before the last episode. Geißendörfer chose not one of the homosexuals in the series, but the heterosexual Urbayern – to show that it can affect everyone. In the early phase of the series in Germany, homosexuality, which was often hidden, brought openly the "Lindenstrasse" into the German living room – a kiss by Carsten Flöter and Robert Engel in 1990 is considered the first kiss between gays on German television. These contemporary discussions were still hot, and later those with a character converted to Islam with terrorist connections were even less so, with the audience rating at around two million. The protests against the end of the series were manageable overall. Inventor Geißendörfer still sees it as "an insult" that the majority of his broadcasting space is now given to the "sports show", as he told the "Süddeutsche". The last episode is titled "Auf Wiedersehen". Geißendörfer nevertheless ruled out a sequel. Andrea Spatzek, who was there almost from the beginning as Gabi Zenker, dreams of a future. "Lindenstrasse – the film" – that could be an idea for the future, she told the "Süddeutsche".