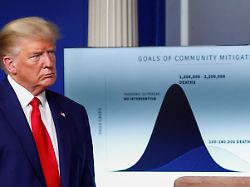 The number of new infections with the novel corona virus in the USA continues to increase rapidly. US President Trump now seems to have recognized the seriousness of the situation and is preparing the population for difficult times. A forecast by the White House paints a bleak picture.
The White House, according to a forecast, fears between 100,000 and 240,000 deaths in the United States because of the pandemic, despite measures to curb the coronavirus. The coordinator of the White House Coronavirus Working Group, doctor Deborah Birx, presented the forecast. They are working on keeping the number down. The range is possible, however, according to US President Donald Trump, without measures to contain the risk of between 1.5 and 2.2 million deaths. When asked if the Americans had to prepare for the probability of 100,000 deaths, director of the National Institute for Infectious Diseases Anthony Fauci said: "The answer is yes, however sobering that number is. We should be prepared for it." He continues to hope that this number will not become a reality. Trump also called the numbers sobering. Trump: "We are at war with a deadly virus" At the same time Trump set the American population to "very hard two weeks" with increasing deaths due to the spread of the corona virus. "I want every American to be prepared for the hard days ahead," he said. "We're going to go through two very tough weeks." He hoped that afterwards there would be light at the end of the tunnel. "But this will be a very painful, very, very painful two weeks." The endurance of the Americans will be challenged. "We are at war with a deadly virus," warned Trump. The virus claimed many lives. "Things are happening in this country that we have never seen before." It is a "matter of life and death" to follow the published guidelines. The number of coronavirus infections in the United States has increased dramatically in the past few days. Measured by the number of confirmed infections, the United States is now the worst affected by the pandemic worldwide. There are already more than twice as many infections with the Sars-CoV-2 pathogen than in China, where the lung disease Covid-19 started: By Tuesday evening (local time), Johns Hopkins University in Baltimore had recorded more than 180,000 cases . Across the US, more than 3,700 people have already died from the virus. "Cheerleader" TrumpTrump announced on Sunday that the restrictive protective measures to contain the coronavirus epidemic in the US should be extended until the end of April. He still sees himself as The nation's cheer: "I'm a cheerleader for the country," Trump said. "I want to give people hope." He was a positive person, not a negative one.