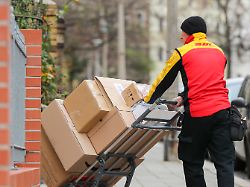 People should stay at home, shopping is currently only possible online. Deutsche Post also notices this. Even without the upcoming holiday business, the group has seen a significant increase in parcels sent. In some cases, deliveries may be delayed.
Parcel service provider DHL is now reporting increasing parcel numbers after a few weeks of the corona crisis. At the beginning of the restrictions, there was no noticeable effect at first. You can now see "a daily increasing number of programs, the amount of which is now very noticeably higher than that of the previous year at that time," said a post spokesman. The amount is expected to increase further over Easter. "The very sudden rise to the pre-Christmas level per day in our network shows us that small retailers in particular are increasingly using DHL to bring their goods to consumers even when the shops are closed," said Post & Parcel Board Tobias Meyer. This could also lead to isolated delays, for example when collecting goods. However, one is in the process of increasingly using colleagues from areas that are currently less in demand – such as mail or land freight business – for the parcels.There is no such effect at UPS, since business customers are particularly important to the service provider, such as large automobile manufacturers. UPS plans to publish precise quarterly figures for package quantities at the end of the month. At DPD, the total package volume is "stable", as a spokesman explained. There are fewer parcels from business customers, but the volume of shipments to private customers is increasing significantly.