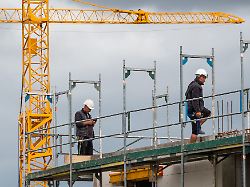 So far, only about 20 percent of construction companies in Germany have been badly affected by the crisis. Companies that rely on cooperation with the building authorities in particular feel the emergency. Possible quarantine regulations for construction workers from Eastern Europe are also worrying.
After years of booming in the corona crisis, business is slowing for construction companies in Germany. "It is not going smoothly, but the construction industry should still be working 70 to 80 percent," said Ilona Klein, spokeswoman for the Central Association of the German Construction Industry. After all, the situation is better than in many other industries. However, it will be more difficult for companies to work with the building authorities. "When they are in the home office, they no longer come to the construction sites for acceptance," says Klein. The public sector is also tendering fewer construction projects. In the past year, the construction industry was able to grow for the seventh time in a row. According to the Federal Statistical Office, sales increased by a good five percent compared to the previous year. Today, about one in five companies in the construction industry sees themselves severely affected by the crisis, according to their main association. The trend is increasing. "For companies, there is a great risk that construction activity will be slowed down or that it will have to be stopped altogether due to possible problems with the suppliers of building materials and building materials as well as subcontractors, illnesses in their own building staff or official measures," said the Association dependent on global supply chains "Some materials, such as tiles, are more difficult to obtain for companies, can be found in the construction industry. The most important building materials are still available. "We are positioned regionally and are not so dependent on global supply chains." Getting rid of building rubble could be difficult for companies if more landfills close, but large and small businesses are worried that they will soon lack the construction workers from Eastern Europe. "After Easter, the situation could deteriorate significantly," said association spokeswoman Klein. The fear: workers may not be able to return to Germany with their families after the vacation due to quarantine regulations. Or they don't come back because they fear infection. Nevertheless: "We are cautiously optimistic that the construction industry will be saved from a total standstill," said Klein. It is important that the state does not fail as a client. Because companies and private individuals are increasingly postponing their orders. "Anyone who is afraid of unemployment will not have a bathroom renovated or build a house."