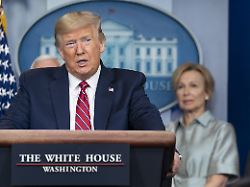 US President Trump is strongly criticized for his initially hesitant approach to the coronavirus pandemic in the USA. He is not aware of any guilt. On the contrary: "I couldn't have done better."
US President Donald Trump said he knew nothing of early warnings from a senior adviser about the corona pandemic. "I didn't see that," said Trump. He had only just found out about it. Trump assured, however, that he had already acted on his own initiative in the sense of these warnings. According to media reports, a senior president's adviser had warned at the end of January of a coronavirus pandemic that could kill hundreds of thousands of Americans. The US population would be "vulnerable" to the virus because there was no immunity or vaccination against it, Trump's trade adviser Peter Navarro wrote in a memorandum to the National Security Council of the White House Half a million people die from the consequences of such an epidemic, it was said. Navarro therefore called for no more entry from China. Trump: "Couldn't have done better" Trump himself had publicly stated until early March that the virus was no cause for concern for the United States. However, at the end of January, the president had blocked foreign travelers who had been in China the 14 days before the pandemic broke out. Trump now referred to this decision on travel restrictions, stressing that this came at the same time as Navarro's warning. Navarro was right at the time with his assessment. However, Trump emphasized that at the same time he acted on his own initiative in this sense, without reading the note, "because I had the same instinct". Trump explicitly praised himself: "I couldn't have done it better." At the same time, Trump again said that it was part of his role to instill confidence in society in times of crisis. "A president has to be a cheerleader for his country."