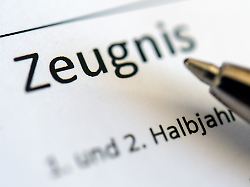 According to the teachers' association, the pupils, who had received mostly poor grades even before the class was canceled due to viruses, should repeat the class – voluntarily. In many federal states, this has an advantage.
According to the German Teachers' Association, pupils with poor performance should voluntarily repeat the class because of the corona crisis, instead of starting the next class level with a big lag. If the previous performance has been very poor, it should be seriously examined "whether a voluntary repetition makes more sense than moving up with massive gaps in knowledge," said association president Heinz-Peter Meidinger of the "Bild" newspaper. However, his recommendation only applies to schoolchildren, in which there were performance deficits before the corona epidemic, which made it unlikely that the class goal would be reached. "In many federal states, voluntary repetition also has the advantage that it is not counted as a mandatory repetition, which can rule out repeating a grade," Meidinger said. At the same time, he called for generous transfer regulations for those who performed poorly in the short term. Meidinger named the possibilities as "a generous advance on a trial basis, possibly even for those who would have remained stuck at the current level." In all federal states, schools would now have to think about "how we will do in the next school year through additional support courses, our own repetition phases and perhaps also a temporary cut possibly relegated curriculum contents and concentration on the basic knowledge can return to the normal track of curriculum fulfillment, "said the head of the association.