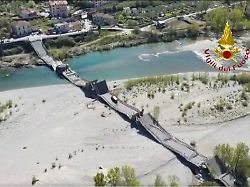 In broad daylight, a bridge over a river between Liguria and Tuscany collapses in northern Italy. Despite the corona lockdown in the region, there is traffic on the bridge, albeit little. The disaster feeds the sharp criticism of Italy's ailing infrastructure.
In Italy, a bridge on a state road between Liguria and Tuscany collapsed. According to initial information, there were only minor injuries, the Ministry of Transport in Rome said. The road leads in Albiano Magra over a river between La Spezia and Massa Carrara, the scene of the accident is between Florence and Genoa. Two vans were on the bridge when it collapsed, the fire brigade said. Rescue workers were deployed to the scene of the accident with several vehicles and a helicopter. The drivers were brought to hospitals. Pictures and videos showed how the bridge lies on the ground. There has been lengthy controversy surrounding the now collapsed bridge in recent months. According to reports, residents have noticed cracks on the bridge and reported them to the authorities last year as a result of several storms. An inspection in November is said to have found no security risks. According to Italian media, the municipality itself had at the time assured the citizens that traffic would not be restricted due to the great importance of the bridge for the region. In August 2018, a motorway viadut collapsed in nearby Genoa. The Morandi Bridge over the Polcevera River plunged 45 meters, killing 43 people. Since then, the often dilapidated infrastructure in Italy has been discussed.