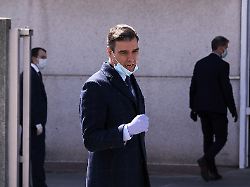 New figures from Spain give hope. Fewer people are infected with the corona virus than in the previous days. At the same time, the number of deaths is decreasing. Despite the positive trend, the Prime Minister is extending the exit restrictions.
The curfew that has lasted for a good three weeks in Spain, which has been particularly hard hit by the corona pandemic, is evidently showing success. According to the Ministry of Health in Madrid, just over 6000 new infections have been registered within the last 24 hours. This indicates a slower spread of the virus. The total number rose to more than 130,000. The day before, around 7,000 new infections had been reported in Spain. At the same time, almost 4,000 patients with Covid-19 were discharged within one day as recovered. This means that more than 38,000 people are healthy again and the growth rates are also falling. In the case of new infections, it fell to less than five percent, after around six percent on Saturday. The death rate was just under six percent. Experts from the Ministry of Health have been certifying the positive trend, including the number of admissions to hospitals and intensive care units, for days, with fewer deaths and the number of new deaths. According to official information, 674 people infected with the Sars-CoV-2 virus died within 24 hours. This means that fewer than 800 new deaths were registered for the first time after nine days. The total number climbed to 12,418. As of Thursday, the country had reported the sad record of 950 deaths in a single day, and despite the positive development, Spain remains one of the worst hit countries worldwide. The virus particularly affects the regions of Madrid and Catalonia in Spain. Prime Minister Pedro Sánchez announced an extension of the state of alert that had been in effect since March 15, including exit restrictions, by another two weeks until midnight on April 25. However, this decision still has to be approved by Parliament.