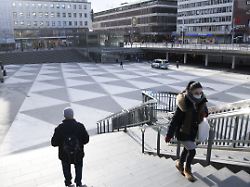 The Corona crisis is still tackling Sweden without major restrictions. The government is changing course slowly. But criticism and pressure from scientists in the country are enormous. There is even talk of "Russian roulette". A nurse's post is going viral.
Immediately after the end of the shift, Anne Rosendahl wrote a report that is echoed throughout Sweden. "The last few days have been overwhelming, now the patients with Covid-19 are really coming to us and they are sick, very seriously ill," noted the nurse at the university clinic in Uppsala. For this purpose, she published a selfie that shows the deep traces that the strains of the past few hours have left on her face. "Half of the people we currently look after are under the age of 50. And not everyone has previous illnesses." Rosendahl wrote about the personnel efforts to keep the situation under control. Colleagues worked overtime, canceled holidays and parental leave, or returned from retirement. "Employees from other clinics come to us." The nurse urged all those who asked how they could help to adhere to the guidelines on protection against infection. Today's behavior will affect "how my job will be in two weeks". The Facebook entry written in Swedish obviously hit the soul of many Swedes. It was provided with almost 12,000 comments and shared almost 42,000 times – a gigantic result for a non-English-language posting in a country with ten million inhabitants. Rosendahl was showered with hearts and likes. But among all the expressions of sympathy and thanks, there were also voices that asked, like more and more Swedish doctors and scientists: Are we really going the right way? Gyms and bars still open In contrast to all other EU countries, the country was insightful and responsible and discipline of the citizens as well as isolation of risk groups and largely waived bans. The declared aim was to slow the spread of the virus as much as possible. Gyms, sports facilities, bars, shops, cafes and schools are still open and events with a maximum of 50 people are permitted. The government had always followed the recommendations of the top health authority around state epidemiologist Anders Tegnell, who shortly before Rosendahl's posting said in interviews: "I would go skiing." Sten Linnarsson, Professor of Molecular Systems Biology at the famous Karolinska Institute, compared the approach, First watch a fire in the kitchen before you put it out: "The danger is that the whole house burns down." The expert spoke of a high risk "that we will soon regret the previous strategy". But then it would be too late for an effective course correction. On April 1, he tweeted: "Today our government finally started fighting Covid-19. For the first time, social distancing is recommended (but not mandatory). Hope it is not too late!" Linnarsson and his colleague Cecilia Söderberg -Nauclér, also a professor of molecular biology at the Karolinska Institute, is one of the signatories of an open letter to the government in Stockholm of around 2,300 personalities, including many scientists and doctors. Above all, they call for extensive tests in the population as far as possible in order to grasp the situation more precisely. "We don't follow, we don't isolate enough – we let go of the virus," said Söderberg-Nauclér. It warned of "total chaos" and a "catastrophe". State epidemiologist sticks to course The criticism is directed primarily against Tegnell. The state epidemiologist spoke only two weeks ago of the fact that his authority received "letters of support in huge numbers" every day. He stubbornly sticks to his course. According to the English newspaper "The Sun", Tegnell found that Great Britain should also have continued its initially relaxed course. He was generally very skeptical of broad lockdowns. They could be useful if a country is unprepared. The expert points out that in Sweden mostly fathers and mothers of a family worked, "many of them in the health system". If children and parents stayed at home, it was worse for medical practices and clinics "than the spread of the virus in a school". Now, however, the number of deaths worries. On March 28, when Rosendahl published her report on Facebook, just over 3,000 Swedes had contracted the coronavirus, 105 had died. Now the ratio is just under 7,000 to just over 400 dead. For comparison: Norway has officially 5700 infected and 70 dead. With 5.4 million, it has significantly fewer inhabitants than Sweden. The bare numbers should reflect the different procedure for tests. "We will have to count on thousands of deaths" Other evidence suggests that critics are right about Tegnell. According to official information, every third Stockholm nursing home or retirement home is affected by the corona virus. Visits there have only been prohibited for a few days. Fredrik Elgh, professor of virology at Umeå University, expressed "deep concern" about the "deadly serious" situation. "I would rather have Stockholm quarantined." Proponents of an early Corona exit in Germany give Sweden as an example that it works differently without completely stalling the economy. A debate has flared up in the Scandinavian country as to whether the government is sacrificing people to economic interests. In the face of such allegations, Prime Minister Stefan Löfven wants to crack down. He wants to be able to close bars, airports, gyms or shopping centers by means of an emergency law. The social democrat told the newspaper "Dagens Nyheter": "We will have to count thousands of deaths." Marcus Carlsson, professor of mathematics at Lund University, said that Tegnell and Löfven played "Russian roulette with the Swedish population". People shouldn't trust the government when it says everything is under control. "I now feel like we're being driven towards disaster like a flock of sheep."