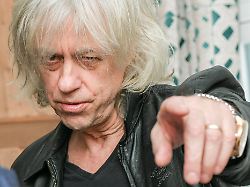 With the band Boomtown Rats, the hit "I Don't Like Mondays" and as initiator of the concert marathon Band Aid, Bob Geldof became famous. Personally, he is calmly facing the corona pandemic. At the same time, he does not believe that people will learn a lot from the crisis.
Irish pop musician Bob Geldof is not afraid of the corona virus. "It would be okay for me if life ended here. I lived a full life. I am extremely alive," said the 68-year-old to the editorial network Germany (RND). * Privacy He stays away from London, the most affected part of the UK by the pandemic. "I own a house in a small town outside of London. My daughters and their husbands are with us. I have a large garden, the weather is fine. We are fine so far. We are safe here," Geldof continued. According to Geldof, there is no reason to despair: "We know that the vast majority of people survive the virus. Every death is one too many, but hopefully the world will get away again." The solidarity of the people gives him hope. "We are currently rediscovering two things: society and self-discipline." "We will forget it immediately" The virus makes people humble, according to the musician. However, he fears that the world will quickly return to normal once the pandemic is over. "Yes, we will forget it immediately. Because every country wants to revive its economy immediately. Because everyone wants to return to their normal life immediately. We will immediately focus on self-rewards again. This is our great drive." Geldof became a front man of the Boomtown Rats group. Her song "I Don't Like Mondays" from 1979 is an evergreen today. Later, Geldof also made a name for himself as a solo artist. He is also known as the initiator of the mammoth concert Band Aid 1985, with which donations against the famine in Africa were collected.