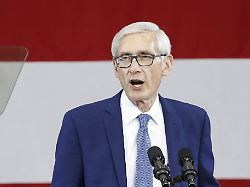 The corona crisis in the United States also plunges the presidential campaign into chaos. One state at a time postpones the ballot box, but Wisconsin argues to the end. Now, the day before the election, the governor creates facts by decree.
Because of the coronavirus crisis, the governor of the US state of Wisconsin has postponed the last minute presidential primaries scheduled there for Tuesday. Governor Tony Evers signed a decree prohibiting voting in polling stations on Tuesday. The Democrat set June 9 as the provisional new election date. It was a difficult decision, said Evers. But he had "the duty to ensure the safety of people". While a number of states had already postponed the primaries because of the risk of infection, the election date was held in Wisconsin until the very end. Evers had tried to postpone it, but failed because of the majority of Republicans in the regional parliament. Now he signed an executive decree to enforce the measure. On Tuesday, according to Evers' plans, Parliament in Wisconsin should discuss the change of dates. There had already been heated discussions between Democrats and Republicans in the state about a possible postponement of the election. Evers complained that there was no parliamentary solution, so he chose the regulation. "I can't watch with a clear conscience and do nothing," Evers said of the short-term move. The Democrats' nomination convention has already been postponed; various other states had previously postponed their pandemic polls scheduled for March and April to a later date. The United States are badly hit by the corona pandemic. The number of cases of infection is higher there than in any other country. Exit restrictions apply to many parts of the country. The schedule of the election year has been completely mixed up by the crisis. Republican incumbent Donald Trump plans to run for a second term in the presidential election in early November. He has already been determined as the presidential candidate of his party. For Democrats, former US Vice President Joe Biden and left Senator Bernie Sanders have yet another race to nominate their party. Biden is clearly in the lead after the previous primaries. So far, Sanders has maintained his presidential application. The Democrats have also postponed the party convention originally planned for July to nominate their presidential candidate until mid-August.