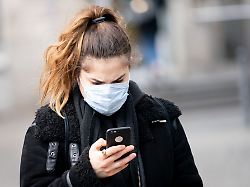 Germany and other EU countries are working feverishly on a Corona app. A big data company apparently also wants to help track down infected people: Palantir, which develops surveillance software for US intelligence agencies. German police authorities are already customers.
The US data analysis company Palantir is apparently currently in talks with several European countries about the delivery of software to combat the corona pandemic. "Bloomberg" reports that Palantir is in negotiations with authorities in Germany, France, Austria and Switzerland, including the association of all Paris hospitals, referring to an insider familiar with the processes. The technology can be used to track and analyze the spread of the virus and identify supply shortages in hospitals and healthcare. Palantir also offers itself when developing exit plans from the quarantine measures, said the insider. A spokesman for Palantir did not want to comment on "Bloomberg" on the report. EU countries are currently working intensively on a cell phone app for tracking corona infected people. According to Internal Market Commissioner Thierry Breton, the EU is already collecting mobile data for this. Deutsche Telekom, Vodafone, Orange, Telefonica, Telecom Italia and other providers have agreed to provide their location data. A team of scientists from eight European countries with the participation of the Fraunhofer Institute is currently working on the technological basis for corona tracking apps as part of the so-called Pan-European Privacy Preserving Proximity Tracing Initiative (PEPP-PT). Collecting data against the pandemic The Federal Government is following the initiative with interest, but various conceivable technical solutions are being considered in parallel, according to the Ministry of Health. The PEPP-PT model is just a ready-made app, not software, that developers or governments can use to build tracing apps, and Palantir also offers such tools. It would be conceivable to use an analysis software called Foundry: With it, Palantir can collate data from remote, separate systems in a database and search for patterns. A similar platform called Gotham was developed for use by intelligence agencies. Both products are currently being offered to health authorities in Europe, Bloomberg quotes the insider. The British health authority NHS is officially using Foundry in the fight against the pandemic to "integrate, clean and harmonize scattered data" and provide a single source of knowledge to support decision-making develop". In addition to Palantir, she has also hired Microsoft, Amazon, Google and other tech companies as technology partners. In the United States, Palantir has also signed a long-term contract with the CDC. They already use Palantir software regularly to simulate the spread of the corona virus in the United States, report the "Wall Street Journal" and "Forbes". A Palantir spokesman has confirmed the operation. Surveillance machine for US intelligence agencies In Europe, Palantir may have a harder time because of privacy concerns. The company was founded in 2004 in Palo Alto, California by US tech billionaire Peter Thiel and entrepreneur Alex Karp, who met at Stanford, the US elite university. In the meantime, she is aiming to go public. Her name is no coincidence: named after the all-seeing stone balls from the fantasy trilogy "Lord of the Rings", Palantir is ultimately a huge data collection machine that builds monitoring software. She got her first orders from the CIA and has been working trustfully with the US secret services for years to analyze the gigantic amounts of data from their interception programs. The Pentagon has now also hired Palantir. Palantir was particularly criticized because the company helped the ICE immigration authority with its software to track down and deport illegal migrants. In Hesse and North Rhine-Westphalia, Palantir is already building software for German police authorities that helps investigators create motion profiles of suspects and explore their surroundings. For the State Criminal Police Office in Düsseldorf, Palantir is developing a program that links and evaluates large-scale data from police and external sources. The contract is endowed with 14 million euros. In Hesse, the use of the similar Palantir system "Hessendata" triggered a committee of inquiry. In France, Palantir software has been in use by domestic intelligence since the 2016 terrorist attacks.