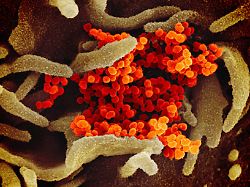 A first rapid test for the detection of antibodies against the new corona virus is approved in the USA, and German institutes and companies are also reporting successes. This could be a major breakthrough in the fight against Covid-19.
In the United States, the FDA (Food and Drug Administration) has approved a first rapid test to detect the new coronavirus (Sars-CoV-2). According to the manufacturer, it should be able to detect two different antibodies in a blood sample within ten minutes. An immune system creates them when it has had contact with the virus. According to the "Ärzteblatt", however, the test does not allow any conclusions to be drawn about possible immunity, since it does not measure the concentration of the antibodies. This should usually be the case if you have survived Covid-19 disease. There is currently no reliable information on possible immune protection after asymptomatic infections, according to the "Ärzteblatt. However, the test can definitely be used to examine the spread of the virus in the population. Such information would be the" third pillar of information that we support need the assessment of the near future, "says virologist Christian Drosten of the Berlin Charité. It is important to find out how many people became infected without realizing it or taking it seriously because they only had weak symptoms." Nevertheless, these people are antibody- positive and, as we can assume, immune. "The" still immunized "thus contribute to the 60 to 70 percent of the population who should have been infected before the pandemic wave came to a standstill. New rapid test from Thuringia Professor Ralf Ehricht. (Photo: Leibniz-IPHT) Professor Ralf Ehricht from the Leibniz Institute for Photonisc in Jena also sees this technologies (Leibniz-IPHT) see above. His team belongs to an international group of scientists who have also developed a rapid antibody test on Sars-CoV-2. According to the press release, the strip test manufactured by the diagnostics company Senova in Weimar is already on the market and, like the US test, is supposed to detect antibodies in a drop of blood within ten minutes. The Leibniz -IPHT assumes that your test also shows whether a person is immune to the virus. However, Professor Ehricht says that one does not know whether immunity is only temporary or permanent. The Thuringian team of researchers and developers developed the test with a Chinese company and a medical device dealer from Wesel within just three months. The effect is confirmed, it says in the press release. Tens of thousands of rapid tests have already been delivered to the North Rhine-Westphalian sales partner, and millions are to follow, according to the "Thuringian General". Relief for doctors, nurses and other antibody tests would also be a great advantage for nurses. Leibniz-IPHT writes that anyone who has successfully survived Sars-CoV-2 and trained antibodies can take care of the sick without being contagious or at risk. Knowledge of immunity can also be very helpful for members of other professional groups who have a lot of contact with people – for example at the cash register, in public transport or at the police station. Nevertheless, the Thuringian rapid test on Sars-CoV-2 in bulk and independent tests still have to prove how reliable it is. This also applies to another German rapid test that the Berlin-based company PharmACT developed. This should detect antibodies in the blood within 20 minutes. Success reports from Berlin and Lübeck This is what the PharmACT test looks like. (Photo: PharmACT) The "Tagesspiegel" wrote a company spokeswoman that the hit rate was between day four to ten of the infection at 70 percent, and more than 90 percent from day eleven. The rate of a false positive test result is almost 0 percent. In the United States, the Berlin rapid antibody test had already been approved by the FDA, and the early hit rates would be surprising. Christian Drosten says the body develops antibodies after about ten days. At the beginning, however, their proportion in the blood was still very low. They could only be clearly demonstrated two to three weeks after an infection. However, Drosten is confident that it will only take a few weeks before "large mass examinations in which we will test thousands of patients" can be carried out. That was on March 25th. Virologists are testing effectiveness According to "Tagesspiegel", virologists at the University of Bonn are currently testing the PharmACT test. To do this, the researchers analyzed positive samples from patients using the rapid test, which does not require a laboratory test, and compared them with the results of a conventional test in the laboratory, as well as the results of another rapid antibody test that the Lübeck-based company Euroimmun recently presented. And other companies will probably introduce rapid antibody tests in the coming days and weeks, because the demand is huge and the profit opportunities correspondingly high.