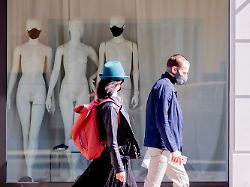 An internally developed exit scenario stipulates that the Federal Republic will only return to normality step by step. Accordingly, the retail trade, restaurants and schools should initially reopen – but subject to conditions. One of these is the obligation to wear protective masks.
The Federal Government does not yet want to give a precise date for easing the existing restrictions. According to a key point paper drafted by the Federal Ministry of the Interior, however, she is already planning for the time afterwards. The document entitled "Transition from Slowdown to Virus Control Phase" recommends that the Federal Republic should gradually return to normal. The ministry itself denied having commissioned the paper. According to the draft, retail, restaurants and, in certain regions, schools should also reopen. Large events and private celebrations were initially prohibited. To prevent the number of infections from rising again, the paper stipulates that protective masks must be worn in buses and trains, factories and buildings as soon as sufficient masks are available. Certain sectors of the economy could initially resume operations as "islands" if they do not provide too much customer contact. The paper says: "Rule of thumb: the more customer contact, the later opening. But the better protective measures, the sooner." As a prerequisite, the paper states that the infection rate remains at one. The Robert Koch Institute (RKI) had determined on Friday that the infection rate is now one – that is, on average one infected person only infects another person. For the next few days, a value below one was even promised, which was achieved up to and including Monday. The paper assumes that hospital capacities are sufficient under this condition. Control via tracking app Even if the pandemic is likely to continue until 2021, it can be kept under control without an "extensive lockdown". However, the prerequisite is an expansion of the tests to 500,000 per day from the current 60,000. Within 24 hours, 80 to 100 percent of the contact persons of an infected person would also have to be identified using an app and then quarantined at home or in hotels. The apps should only be used voluntarily. According to Chancellor's Office Helge Braun, such an app could be ready for use in the coming days or weeks. Island solutions are also possible for the reopening of schools and educational institutions, provided that Covid 19 tests are introduced for students. The paper also states: "Opening up of retail and catering, but limiting the number of people in closed rooms". If it is possible to set up a control system at the EU borders, controls at the internal borders could be abolished, and the approximately 20 million particularly vulnerable citizens should receive special protection. According to the document, everyone must have access to free tests. People in old people's homes and nursing homes will also have to continue living with restrictions, at least regionally. "Visits are blocked for hospitals and for old people's homes and nursing homes in epidemic regions," the paper says. Public pressure is increasing enormously. So far, restrictions on public life apply until April 19. Government spokesman Steffen Seibert had announced at a press conference on Monday that the government could "not call an exit date". Seibert spoke of a "slight hope" that is associated with the new infection numbers. Nevertheless, it remains "absolutely necessary" to comply with all rules of reduced public and private life even during the Easter holidays. Politicians have been debating the right time to relax since the restrictions began. AfD, FDP, Greens and Leftists had asked the government for a clear exit scenario. In addition, public pressure is increasing because the gradual lifting of the requirements has already been announced in neighboring Austria. Austria's Chancellor Sebastian Kurz has announced the reopening of smaller shops, as well as DIY and garden centers, from April 14th. Nevertheless, the exit restrictions in the Alpine Republic remain in effect for the time being.