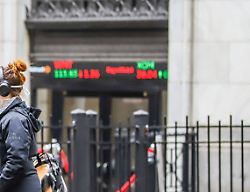 In the meantime, it looks as if the US stock markets are still making strong profits on the second trading day of the week. But they cannot keep their daily highs, in the end they even close in the red. Only leisure and tourism values ​​continue to grow.
The US stock markets closed slightly in the red after the strong gains from the previous day on Tuesday. The daily highs with premiums of up to 4 percent could not be maintained. Trade was again shaped by the hope that the measures introduced to contain the pandemic could be eased in the foreseeable future. However, the pandemic hits the US hard. The Dow Jones index fell 0.1 percent to 22,655 points. The S&P 500 closed 0.2 percent lighter at 2,659 points, while the Nasdaq composite dropped 0.3 percent to 7,887 points. S&P 500 2,649.50 At the beginning of the week, some encouraging signals came from the USA that the shutdown of public life is slowly paying off, as the dynamics of the corona spread slow down. Nevertheless, authorities warn of hasty conclusions. According to the Johns Hopkins University, almost 11,000 people in the United States have died from the virus-induced lung disease Covid-19. In the US state of New York alone, there were 731 people in the last 24 hours, more than on any day before. This brought the total death toll in New York to 5,489, Governor Andrew Cuomo announced on Tuesday. More than 138,000 infections have already been confirmed in the state with the metropolis of the same name, while the US government plans to increase aid to small and medium-sized businesses by $ 250 billion. Treasury Secretary Steve Mnuchin wrote on Twitter that he had discussed the additional funding with Republican and Democratic leaders in Congress. Small and medium-sized businesses would have to get the money they needed to survive. Just a flash in the pan? "Investors are now trying to identify risks and opportunities," said Bruce Pang of China Renaissance Securities. "Experience from China shows that the market finds a bottom when the number of infections peaks." Investors also believed that much of the detrimental economic impact, such as slower growth, rising unemployment, sluggish demand and broken supply chains, was already priced in at lower prices. However, the risks remained high and the markets were prone to taking profits and falling again, and portfolio manager Nancy Perez from asset manager Boston Private Wealth also warned that the interim gains could have been a flash in the pan. "There is a lot of headwind that can cause the market to retest its recent lows." Even if the restrictions on paper were loosened, the recovery of the economy would take time. Leisure and tourist values ​​put 10.28 on American Airlines investors still believe in a near relaxation of the restrictions of the public life. They stocked up primarily with leisure and tourism values ​​that had been particularly hard hit in the past few weeks. Airline shares were also in demand: United Airlines rose 1.9 percent and American Airlines rose 7.6 percent. Kraft Heinz rose 2.7 percent after the food company announced growth in sales in the first quarter, while analysts expected a decline. The company now anticipates organic growth of 3 percent and 6 percent, respectively. Luminex improved by 5.2 percent. The biotech company had released its first quarter sales in advance. The proceeds exceeded our own goals, which was mainly thanks to the area of ​​molecular diagnostics. Due to the corona virus pandemic, sales increased by more than 25 percent. After the course jump at the beginning of the week, Carnival went up another 10.7 percent. The trigger came from the previous day's news that Saudi Arabia's sovereign wealth fund had acquired 8.2 percent of the world's largest cruise line. Carnival, like other cruise providers, recently suffered particularly badly from travel restrictions and the lack of liquidity in the company. Royal Caribbean increased 13.3 percent.