Menu
Home > news > "Were extremely down to earth": Harry and Meghan distribute food to the sick 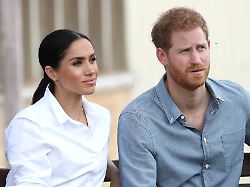 They may no longer call themselves royals, but charitable work is still very important to Prince Harry and Duchess Meghan. In Los Angeles, their new home, the couple is now distributing meals to the sick and needy.
British Prince Harry and his wife Meghan helped deliver food to the sick and needy in Los Angeles. The couple served meals on Easter Sunday and again on Wednesday, Richard Ayoub, director of Project Angel Food, a non-profit organization, told People magazine. "They were extremely down to earth and really interested in the people they met," said Ayoub. To protect them during the corona pandemic, they wore masks and gloves and kept the recommended distance from other helpers and food recipients. According to the delivery service manager, Meghan was familiar with the service from earlier times in Los Angeles. He also showed the couple the kitchen of the facility, where cooks and helpers prepare meals. Project Angel Food says it distributes 1,600 meals a day to sick and high-risk individuals in the Los Angeles area. The need for the corona crisis increased, Ayoub said. Harry and Meghan gave up their royal duties in late March. The couple temporarily lived with their little son Archie on Vancouver Island in Canada. According to a spokeswoman, the two want to focus on their family and further develop their future nonprofit organizations. The family recently moved to Los Angeles.