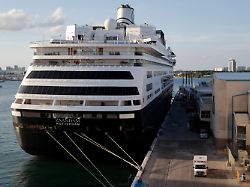 For a long time, the people on board the "Zaandam" were troubled by the uncertainty: the cruise ship on which the corona virus broke out had no port to go to. Only when it became clear that Americans were on board did the Florida governor give permission to moor.
The odyssey of the cruise ship "Zaandam" affected by the corona virus has ended. The "Zaandam" has moored in Fort Lauderdale, Florida. The majority of the passengers are said to be flown out of the city near Miami. However, some sick people should also receive medical care on site or remain on board for quarantine, as the mayor of Fort Lauderdale, Dean Trantalis, announced. Shortly behind the "Zaandam" the sister ship "Rotterdam" also set course for the port. On the "Zaandam", several passengers had tested positive for the corona virus. The Holland America Line shipping company – which operates both "Zaandam" and "Rotterdam" – announced on Monday that four passengers had died and others were in mortal danger. Both ships together have around 2500 passengers and crew on board, including 311 US citizens, 52 of them from Florida, according to the shipping company. There were originally 79 Germans on the "Zaandam" – most of them were moved to the "Rotterdam", on which there should be no passengers who tested positive for the virus. Most passengers can go straight home, according to the shipping company on Wednesday Both ships totaled more than 230 passengers and crew since March 22 developed flu-like symptoms. At the moment, about 45 passengers are still ill and unable to travel. They could stay on board and be isolated there until they recover. However, individuals, estimated at less than ten, urgently need medical attention on land. Around 1200 passengers were in good health and could take the trip home under the necessary protective measures. The "Zaandam" expired on March 7 in Buenos Aires. The cruise was originally scheduled to last a month and end on April 7th in Fort Lauderdale, Florida. Because of the worldwide spread of the corona virus, the end should be brought forward to March 21st: The "Zaandam" should then arrive in San Antonio, Chile, where a stopover was planned anyway. Given the pandemic, however, Chile closed all cruise ship ports. Only after long negotiations was the passage through the Panama Canal from the Pacific to the Caribbean approved. Several Latin American countries had denied Zaandam permission to enter their ports. Trump intervened, and Florida Governor Ron DeSantis initially refused to allow the ships to enter his state. He argued that medical resources in the region also affected by the virus should be kept available for the local population. However, US President Donald Trump intervened and promised help to the passengers. "From a humanitarian perspective, we have no choice," Trump said at the White House on Wednesday evening (local time). "People die." He added, "We have to do something." After a phone call to Trump, DeSantis had given in and pointed out that there were also Americans on board – including people from Florida. This was initially unclear and had changed the situation. On Thursday, DeSantis told Fox News that it had instructed the National Guard to help evacuate the ships, particularly to ensure the safety of Florida citizens. The passengers should not simply go ashore on their own. "It will all be controlled." At a press conference, the governor said the foreigners would be flown on charter planes without coming into contact with the local population. Mayor Trantalis wrote on Twitter that various protective measures had been agreed so that infected people would not come into contact with the local population. The majority of the passengers, who are not ill and have no symptoms, should be brought directly to airplanes by bus to leave Fort Lauderdale. A small group of seriously ill passengers should be taken to local hospitals. Those with mild illnesses or symptoms should remain in quarantine on board.