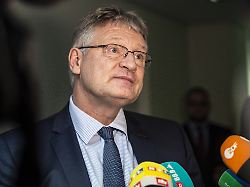 If the Bundestag election were on Sunday, more people would vote for the CDU and CSU than for the SPD, Greens and Leftists combined. According to Forsa, the FDP is only just above the five percent mark. Kalbitz 'sacking splits the AfD, but most of its voters agree with Meuthen.
The political mood in Germany is largely unchanged after the first major easing of the corona measures. The Union remains by far the strongest political force in the Corona crisis. Compared to the previous week, the CDU / CSU in the RTL / ntv trend barometer can improve by one percentage point and are again at 40 percent. This makes the Union stronger than the entire "left" voters' camp of the Greens, SPD and Left, which together account for 39 percent. The FDP loses one percentage point and is now 5 percent. If the Bundestag election were held this Sunday, the SPD, FDP and AfD would receive fewer votes, the Greens and the Union would receive more votes than in the 2017 Bundestag election: CDU / CSU 40 percent (2017: 32.9 percent) , SPD 15 percent (2017: 20.5 percent), FDP 5 percent (2017: 10.7 percent), Greens 16 percent (2017: 8.9 percent), Left 8 percent (2017: 9.2 percent), AfD 9 Percent (2017: 12.6 percent). 7 percent would choose one of the other parties (5.2 percent). The number of non-voters and undecided is currently 26 percent (23.8 percent). The growth of the Union in the Corona crisis is mainly fed by former voters of the SPD, the FDP and the Greens. In September 2017, 23 of the 100 new CDU / CSU voters voted for the SPD, 22 FDP, 12 Greens and 3 AfD. Contrary to popular belief, the Union hardly benefits from the AfD's losses because most of the former AfD voters who had migrated at the time would not vote at all. The AfD accounted for only 0.2 percentage points of the Union's growth of 7.1 percentage points. Meuthen received encouragement In the dispute over the party exclusion of AfD board member Andreas Kalbitz, the supporters of the "Alternative for Germany" were torn apart. On behalf of Mediengruppe RTL Deutschland, forsa asked AfD supporters in East and West Germany about their assessment this week. 51 percent think the Kalbitz expulsion is correct, 49 percent do not support the decision. 40 percent of those questioned consider the expulsion wrong, 9 percent are undecided. 49 percent of East German supporters are against exclusion, 42 percent are in favor. In the West, only 35 percent reject the exclusion, while 56 percent welcome the move. Another value shows that the Höcke camp among all AfD supporters is rather small: 80 percent of Höcke supporters reject the Kalbitz expulsion. Overall, the co-party leader Jörg Meuthen currently has most of the supporters behind him. 62 percent of the AfD voter camp believe that Meuthen is most likely to "stand for the values ​​and goals of the AfD". Only 22 percent think of Kalbitz ally Björn Höcke. Accordingly, 57 percent of AfD supporters are convinced that Jörg Meuthen will ultimately win the power struggle. 24 percent of AfD supporters trust the "wing" around Björn Höcke to win. In the opinion of most AfD supporters – 65 percent of the power struggle should be resolved at a special party convention.