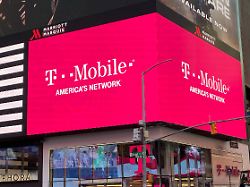 The corona crisis is burdening Deutsche Telekom, but is also helping it. This can be seen in the figures for the first quarter: profit and sales increase, although many branches have to remain closed at times. The highly profitable US business in particular is getting bigger and bigger.
Deutsche Telekom AG came through the corona crisis almost unscathed in the first quarter. Sales rose by 2.3 percent to 19.9 billion euros, as the group announced. Adjusted for special effects, earnings before interest, taxes, depreciation and amortization (Ebitda) grew by a good 10 percent to 6.5 billion euros. Consolidated net income rose by 8.5 percent year-on-year to 1.3 billion euros. While Ebitda was above analysts' forecasts, the group's sales fell short of expectations. Deutsche Telekom 13.71 The effects of the pandemic on business are likely to be "comparatively minor," said management led by CEO Tim Höttges. He therefore confirmed the annual forecast: operating income of EUR 25.5 billion is to be achieved in the current year. There are likely to be other contradictory developments in sales: the closure of branches and the lack of smartphone sales are having a negative impact on business, on the other hand, more calls are made in the crisis and customers switch mobile operators less frequently. The US business proved to be the driving force, contributing more than half to the group's sales. This will be even more from the second quarter. Because T-Mobile US recently expanded its market position in the USA after a long back and forth with the takeover of its smaller competitor Sprint. From the second quarter, the merged US group will then appear in the Telekom balance sheet. While sales in the United States rose by 3.7 percent in the first quarter, the increase was lower in Germany and Europe. However, Deutsche Telekom's broadband customers in the Federal Republic had 83,000 new registrations, the best value in two years. Incoming orders, which are important for future business, fell by 13.4 percent to 1.4 billion euros at the beginning of the year. Sales stagnated at around 1.6 billion euros.