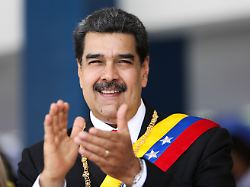 The EU is increasing pressure on Venezuela's ruler Maduro and tightening sanctions. But Maduro strikes back: EU ambassador Pedrosa should leave the country. She has 72 hours to do this.
After a new round of sanctions by the European Union against Venezuela, the government of the South American country has expelled EU ambassador Isabel Brilhante Pedrosa. "I decided to give the European Union ambassador in Caracas 72 hours to leave our country," said President Nicolás Maduro. "End European colonialism against Venezuela." The EU had previously extended sanctions against supporters of Maduro. Eleven officials are affected, who are accused of participating in actions against democracy and the rule of law. For example, they are said to have ensured that members of the National Assembly can be politically persecuted or to be responsible for restrictions on freedom of the press and freedom of expression. All eleven affected are now subject to EU entry bans and freezes of assets.Military support MaduroMaduro has been fighting for power for a year and a half with the self-appointed interim president Juan Guaidó. The young MP is recognized by the United States, many Latin American and European countries as a legitimate interim president. Maduro, however, can count on China, Russia and its allies Cuba, Bolivia and Nicaragua. He is also supported by the country's powerful military, which has so far affected 25 people in the Maduro area. The export of weapons and equipment to Venezuela that can be used to suppress civil society is also prohibited. In the past year, the Venezuelan government had declared the German ambassador an undesirable person and had expelled the country. However, the diplomat was later able to return to his post.