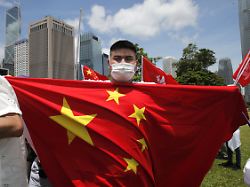 Pro-democratic groups in Hong Kong have been fighting for the preservation of democratic structures for some time. President Xi is now enforcing a controversial security law, supposedly to deal with Hong Kong's terrorist activities. The EU suspects something completely different.
The EU has criticized China's adoption of the controversial Hong Kong security law. The EU regrets the move, said EU Council President Charles Michel in Brussels. It is now being examined with the Member States how it will react. EU Commission President Ursula von der Leyen said the law "threatens to seriously undermine the high degree of autonomy in Hong Kong and adversely affect the independence of the judiciary and the rule of law". The EU has repeatedly made it clear that China will risk "very negative consequences" if the law is passed, said von der Leyen. This also has implications for the trust of companies and China's international reputation. The Standing Committee of the National People's Congress in Beijing had passed the law and is now signed by President Xi. Critics accuse the Chinese leadership of abolishing the "one country, two systems" principle and trying to suppress democratic civil rights in Hong Kong. The former British Crown Colony had been granted special rights for 50 years, including freedom of expression and assembly, when it was handed over to China in 1997. Party Announces Dissolution After the Security Law was passed, the pro-democratic Demosisto party in Hong Kong announced its dissolution. "After many internal consultations, we decided to dissolve and, given the circumstances, stop all activities as a group," Demosisto told Twitter. The party also included well-known democracy activist Joshua Wong, who has already imposed a number of sanctions on the United States. Washington announced that it would no longer deliver arms to Hong Kong. Washington had already imposed entry restrictions on Communist Party officials last week. Prior to that, the special administrative zone had already been deprived of special status, which means that Hong Kong no longer benefits from privileges in economic relations with the USA such as lower tariffs.