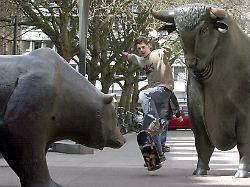 In the middle of the greatest economic crisis, millions of small investors are storming the stock markets worldwide. While the professionals are afraid of a second violent crash, more and more amateurs are getting on – despite the highs. So far, this optimism has been amply rewarded.
The situation is clear for the professionals: According to a worldwide survey by Bank of America, almost four out of five fund managers believe that the stock markets are overvalued. Professional investors have never been so pessimistic, at least since the start of the regular survey more than 20 years ago. Because the economy is shrinking rapidly worldwide. In addition, unless the second epidemic wave completely slows down the expected upturn, the expected upswing is likely to be slower and tougher than expected at the beginning of the Corona crisis. However, it is currently not the managers of the funds with their billion-dollar assets and investment decisions based on professional analyzes that, as usual, set the direction of the world's stock exchanges. After the massive slump in March, prices rose temporarily from Frankfurt to New York at record speed – mainly because new small investors are storming the stock markets. "With around 70,000 new custody customers, the first six months of 2020 are an absolute record half-year for Flatex," says CEO of the online broker, Frank Niehage, ntv.de. Not only did the number of investors increase by almost 20 percent in the Corona crisis, but the trading activities of customers also increased significantly. At Comdirect Bank, more than 50,000 investors opened new custody accounts in March and April alone, three to four times as many as in the corresponding months of the previous year. ING, the largest German direct bank, reports, according to "Welt am Sonntag", of more than 70,000 new custody customers per month at the height of the crisis. According to surveys by various media, far more than 500,000 people have ventured to the stock market with new depots in Germany, including many for the first time. To classify: In the past year, fewer than ten million Germans had shares or equity funds at all. This minority suffered huge losses in February and March. The shares listed in the leading German index Dax lost around a third of their value at times. But instead of feared by some observers, the small investors were not scared out of the market. On the contrary, there was a real run on stocks – and not just in Germany. "We see this new customer boom in depots and trading activity across Europe in the 18 countries in which Flatex and Degiro operate," says Flatex boss Niehage. Together with the recently acquired Dutch online broker Gegiro, Flatex currently has one million customers in Europe. "We want to double that in the foreseeable future to two million," said Niehage, who does not expect the boom to end quickly. New dotcom bubble? Especially in the USA, there has been a real stock market hype surrounding the retail investors, often referred to as "retail bros" do exactly the opposite, what professional analysts and experts advise. The Robinhood trading app alone is now used by more than 13 million Americans to trade stocks and other securities – around three million more than before the Corona crisis. As the broadcaster CNBC reports, the mostly young users partially invest their checks from the government's corona stimulus package. Skeptical analysts who warn of overheating of the stock markets and setbacks in the prices are insulted by the social media star of the scene Dave Portnoy as "idiots" and "idiots". The obvious risk in the middle of an economic crisis in or on stock markets Getting close to record prices is obviously not enough for many of the "retail bros" in the USA as a thrill. At times, extreme price rises in the most likely worthless stocks of insolvent corporations like Hertz or JC Penny have been at least in part due to the speculation of robinhood users in recent weeks. Even if the shares of Hertz and others have crashed again, the optimism of small investors has paid off so far. According to a specially created index of the investment bank Goldman Sachs, the amateurs with their portfolios gained more than 60 percent during the rally from the bottom of the Corona crash in March to mid-June. A comparison group of fund managers only achieved 45 percent. A comparison with the stock market hype around the turn of the millennium is obvious. At that time, hundreds of thousands of small investors in Germany invested their savings in shares for the first time and initially made high profits – until the so-called dotcom bubble burst. The confidence of the Germans in the stock market, some of which lost their fortune with investments in allegedly popular shares that were advertised as rock solid, has been shaken since then. Neuhage does not see that history is repeating itself in the current boom. The fact that the turmoil surrounding the Wirecard scandal has now ended the new share enthusiasm is not to be feared, at least among its customers. They had above-average financial knowledge. "They know that things can go down and how to protect themselves. That is why a single event like Wirecard bankruptcy will not generally deter them from investing in stocks."