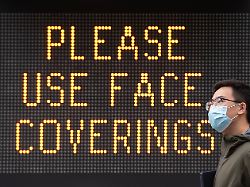 Mask wear helps in the coronavirus pandemic. The British government has now found that out. And for those who still haven't made it, Banksy has created a new work – including an addendum: "If you don't wear a mask, you won't get it."
The mysterious street artist Banksy used rat pictures to advertise masks in the Corona crisis on a London underground. Banksy is said to be on a one-minute video on Instagram – with a mask, white protective suit, blue rubber gloves and an orange safety vest. Passengers do not recognize him because they think he is an employee of the transport company. The video shows how the artist uses stencils to paint rats on the inner walls and windows of the wagons. For example, an animal sails down with a mask as a parachute, another – without a mask – sneezes at a window with a lot of paint. Banksy also used spray cans and a pressure sprayer for his pictures. At the end of the video, the artist alludes to the hit "Tubthumping" by the band Chumbawamba, which says, among other things: "I get up again" . As a comment, Banksy left on Instagram: "If you don't wear a mask, you won't get it." Mask requirement from July 24th The British government announced on Tuesday that a mask requirement would apply in supermarkets and other shops in England from July 24th. Each country in the UK decides on its own measures to fight the pandemic. A mandatory mask on public transport was introduced in England in June and is not the first work in which Banksy addresses the pandemic. With a large painting, he thanked the heroes of the pandemic at the General Hospital in Southampton in May. The picture also published on his Instagram account at the time shows a boy kneeling and letting a nurse doll hover in the air in his hand. Like Superman, she extends her hand – wearing a face mask, cape and an apron with a red cross. The artist left a note in the hospital at the time that said, "Thank you for everything you do. I hope this illuminates the place little, even if it is only black and white. "The mysterious Banksy door The so-called Banksy door. (Photo: picture alliance / dpa) Banksy is currently making headlines in Italy too – in an art thriller. Italy returned the so-called Banksy door stolen from the Bataclan concert hall in Paris to France on Tuesday. A sad woman with a veil can be seen on the door. It was disassembled in Paris in January 2019. Investigators had tracked down the artwork in Italy only last month. On November 13, 2015, 90 people were killed in a terrorist attack in the Bataclan. The gloomy picture of the woman had subsequently appeared on the outer door. It is said to be a tribute to Banksy's victims; Banksy's identity puzzles. It is known that he comes from Bristol and came to London in the late 90s. He made a name for himself with socially critical and mostly controversial motifs.