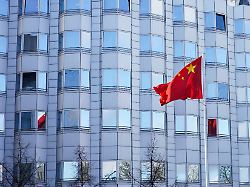 In Hong Kong – unlike planned – elections will only take place next year. China cites the corona pandemic as the reason. However, critics suspect political calculations behind it. The German reaction to the postponement of the election is now causing a stir between Beijing and Berlin.
China has sharply criticized Germany's suspension of the extradition agreement with Hong Kong. In a statement distributed by the Chinese embassy in Berlin, Germany is accused of a "serious violation of international law" and serious interference in internal affairs. "We strongly reject this and reserve the right to react further." The statement also expressed anger and rejection of Foreign Minister Heiko Maas' "erroneous statements" by the SPD. Maas announced the suspension of the extradition agreement on Friday evening. He had emphasized that Germany had repeatedly expressed the expectation that "China would comply with its international law obligations". This includes the right to free and fair elections in Hong Kong. In the embassy's opinion, the postponement of the election by one year due to the corona pandemic in the Chinese special administrative region was defended as "reasonable". It is done to protect the lives and health of people in Hong Kong. The democratic opposition, on the other hand, sees only one pretext to prevent the loyalist camp from being embarrassed. Hong Kong's autonomy at risk China is not the first to be criticized for its Hong Kong policy. At the end of June, a new security law was passed, which also caused a stir. It targets activities that China sees as subversive, separatist, or terrorist. It is also intended to punish "secret agreements" with forces abroad. It is the most extensive encroachment on Hong Kong's autonomy to date and gives China's state security extensive powers. Since the return of the former British Crown Colony to China in 1997, Hong Kong has been ruled autonomously with its own liberties. From the point of view of critics, the State Security Act means the end of the principle "one country, two systems" that has been pursued since then. It is also seen as a violation of China's international obligations in returning Hong Kong.